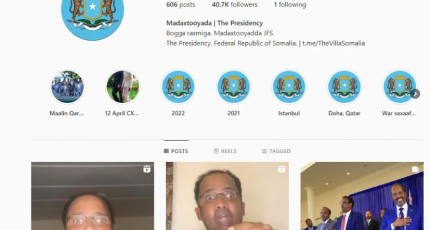 MOGADISHU, Somalia - The official Instagram page of Villa Somalia, the presidential palace has been hacked. This incident caused a major embarrassment to the Federal government.

The verified account which was previously run by Farmajo's communications team has currently over 40.7k followers who are in shock and commenting on the hacker's videos.

The president's office is yet to comment on the hacking of the presidency's Instagram handle. It comes months after Hassan Sheikh took office from Farmajo as 10th president.