What are the new Egypt’s pledges to Somalia?

He also hailed the “unique” support provided by Egypt in terms of Somali security and social service delivery and for the role of Egypt in rebuilding Somalia. 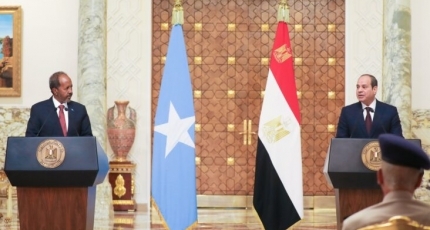 During the phone call, Sisi also stressed Egypt’s readiness to continue its support to Somalia to build and consolidate state institutions, the Egyptian Presidency said in a statement.

Sisi also affirmed Egypt’s readiness to activate all forms of bilateral cooperation with Somalia, especially on the economic and trade levels and regarding training Somali technical cadres.

Mohamud, for his part, reviewed with Sisi the latest developments in his country’s internal situation and the steps currently taken to restore security and stability in Somalia and overcome the various challenges that the country faces, especially the threat of terrorism.

Mohamud also highlighted his keenness to enhance coordination and consultation with Egypt on various regional issues of mutual concern and develop Egyptian-Somali relations on all levels.

The Somali president underlined the historic relations between the two countries on the official and popular levels, hailing Egypt’s historic role in backing Somalia and the support Egypt provides to Somalia in various fields, according to the statement.

Mohamud made an official visit to Egypt late in July less than two months after he was announced the new president of Somalia. During his Cairo visit, Mohamud discussed with Sisi bilateral relations and regional issues.

During a presser following their Cairo meeting, Sisi said he has agreed with his Somali counterpart on the need to reach a binding deal on the filling and operation of the Grand Ethiopian Renaissance Dam (GERD) without delay.

This should be based on the United Nations Security Council’s (UNSC) presidential statement in September last year in order to preserve regional security and stability, Sisi said in a joint press conference with Mohamud in Cairo.

Sisi said he discussed with Mohamud the GERD issue, affirming that they highlighted the danger of unilateral policies when implementing projects on transboundary rivers.

Sisi added that they affirmed the necessity to abide by the principle of cooperation and prior consultation between riparian states on GERD to ensure no harm is caused to any of them in accordance with the relevant international law resolutions.

Sisi congratulated Mohamud for assuming the post in June as an important step toward enhancing Somalia's stability.

Sisi said Egypt was one of the first countries to recognize Somali independence in 1960 and has kept on supporting Somalia to achieve security and stability.

“We still remember with pride Egypt's martyrs who lost their lives in order for Somalia to gain its independence and preserve its territorial integrity,” Sisi stated.

Sisi said his talks with Somali President Mohamud reflected the close visions that they share on many bilateral and regional issues and files of mutual concern.

Sisi said he reviewed with Mohamud all aspects of ongoing bilateral cooperation and means of boosting them in order to cope with the Egyptian-Somali political relations.

During the talks, Sisi said he followed up with Mohamud on the progress achieved with regard to the Egyptian-Somali bilateral cooperation projects and agreed on joint work to enhance efforts of economic development in Somalia.

Sisi said he also followed up on efforts to open Banque Misr's branch in Somalia, which were crowned with success as the Central Bank of Somalia granted the branch a final operating permit in July.

“We hope that the inauguration of Banque Misr branch in Somalia contributes to enhancing Egyptian commercial and investment presence in Somalia in a way that benefits the two sides,” Sisi said.

Sisi and Mohamud also followed up on enhancing cooperation in education realms, counterterrorism, and extremist thought by providing the required training to build the capacities of Somali cadres in all fields.

Sisi and the Somali president prioritized discussions on the Horn of Africa issues and agreed on enhancing security and stability in this region of strategic importance, the presidency added.

The two presidents agreed on intensifying cooperation and coordination with Somalia on Red Sea security, stressing the responsibility of riparian states to draft all relevant policies with a comprehensive perspective that takes into account the developmental, economic, and security dimensions.

Egypt affirms support for Somali efforts to enhance peace and security in the country and eliminate terrorism in order to achieve the desired development, overcome the current challenges, and fulfill people's aspirations, Sisi added.

For his part, Somali President Mohamud affirmed that since the independence, Egypt and Somalia have been linked by security, economic, and social service delivery means and areas.

There are still schools built by the Egyptians in Mogadishu and many parts of Somalia, Mohamud said.

“It was only the circumstances that Somalia was facing in the last 3 decades that made our relationship halted and throughout these 30 years, Egypt has been with us to make sure that we come back to our right position in the int'l arena,” Mohamud stated.

He also hailed the “unique” support provided by Egypt in terms of Somali security and social service delivery and for the role of Egypt in rebuilding Somalia.