The president whose term ends in 5 days faces pressure and was accused of bypassing the electoral law by stacking the poll body with his allies, intelligence agents, and civil servants to rig the next election. Who is the man challenging Farmaajo? 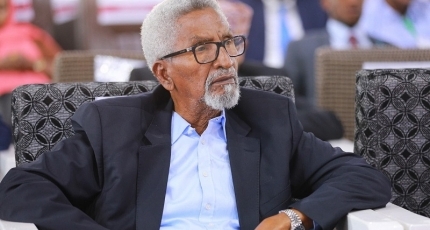 MOGADISHU, Somalia - Abdi Hashi, the Speaker of Somali Senate, was born in Babille located in Ethiopia’s Oromia Region in 1946 and he received his High School education in Harar before deciding to move to Somalia.

After arriving in Somalia, Hashi studied economy at Somali National University in 1985-1990 on the eve of the collapse of the military regime led by Mohamed Siad Barre who ruled the country for 27 years.

Abdi Hashi, 75, joined in politics nearly two decades ago by becoming a member of parliament [MP] in the former Transitional Federal Government led by late Abdullahi Yusuf Ahmed from 2004 to 2009.

In 2012, he was elected as MP in the first election in Somalia for more than 30 years and held the legislative post until 2016 after the four-year term of the Federal Government of Somalia led by Hassan Sheikh ended.

In the next election, Hashi vied for Senate seat in January 2017 and won the election, a move that led him to be picked as the speaker of the first-ever 54-member Upper House Chamber of Somali assembly.

In the past two years, relations between Abdi Hashi and the country’s president Mohamed Abdullahi Farmajo strained and went to the lowest-point after clashing over constitutional issues.

Hashi who hails from Somaliland accused Farmajo of undermining and disregarding the Senate which was established to represent the Federal States in the Somali central government based in Mogadishu.

He also blamed the president for subverting the election process after unilaterally appointing the committee entrusted to oversee the election for northern MPs in line with the provisional constitution.

According to Hashi, Villa Somalia has worked closely with the Lower House of parliament and minimized the Senate’s tasks to debate and approve any bill from the cabinet before going to the president’s office for signing it into law.

Somalia through the current clan power-sharing system [4.5], four big clans and other minority tribes will choose members of parliament that will decide on the country’s next head of state.

The Senate speaker said Somalia needs free and fair elections in which results are accepted by all citizens, like previous transparent poll processes, with the winner supported by the whole political spectrum.

But the country has missed three deadlines to go to the polls since last year due to a deadlock over the electoral process between the Federal Government and the heads of the five regional administrations.

The president whose term ends in 5 days faces pressure and was accused of bypassing the electoral law by stacking the poll body with his allies, intelligence agents, and civil servants to rig the next election.

The committee coordinates the parliamentary elections before the presidential poll expected to be held on February 8 of this year despite fears it could be postponed to another six months due to the standoff.