The former prime minister also stated that the recent decision by the Supreme Court to dismiss his petition, challenging Ruto's election, was 'not based on the facts and the law'. 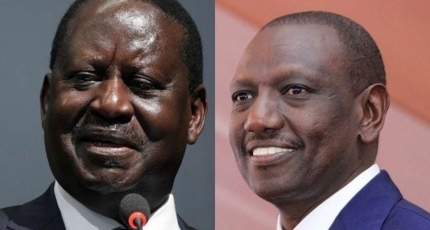 In a statement to newsrooms on Monday, Raila, who ran against Ruto in the August 9 general election, said he had received a personal invitation from the Kenya Kwanza Alliance leader to attend the event set to be held at the Kasarani stadium.

Raila, however, disclosed that he won't be available to attend the event because he is out of the country.

While citing other reasons why he would skip the event, Raila said he doesn't believe Ruto was validly elected as Kenya's fifth president.

"This evening, I received a letter and a telephone call from H.E Dr. William Ruto inviting me to his inauguration set for tomorrow, September 13, 2022. I regret however that I will not be available for the inauguration because I am out of the country and I also have other serious concerns," Raila said.

"First, I believe that the Independent Electoral and Boundaries Commission, the body in charge of our elections, did not conduct a free and fair election."

The former prime minister also stated that the recent decision by the Supreme Court to dismiss his petition, challenging Ruto's election, was 'not based on the facts and the law'.

"For these reasons, the outcome of the election remains indeterminate. Once I return to the country, I will, jointly with Azimio la Umoja One Kenya Coalition Party leaders, announce our next steps as we seek to deepen and strengthen our democracy," Raila added.

A seven-judge bench of the Supreme Court on September 5, unanimously ruled that the presidential election was conducted in line with the country’s constitution, terming Raila's evidence that the election was bungled as 'hot air'.

Reacting to the ruling then, the Azimio flag bearer and his running mate Martha Karua said they 'respect the decision although they disagree with it.

"We have taken note of the decision of the Supreme Court on the Presidential election held on August 9th, 2022. We have always stood for the rule of law and the constitution. In this regard, we respect the opinion of the court although we vehemently disagree with their decision today," Raila said.

The Azimio duo maintained that the August 9 presidential poll was not credible.

"Our lawyers proffered irrefutable evidence and the facts were on our side, unfortunately, the judges saw it otherwise. We find it incredible that the judges found against us on all nine (9) grounds and occasions resulted in unduly exaggerated language to refute our claims," he added.

"This judgment is by no means the end of our movement, in fact, it inspires us to redouble our efforts to transform this country into a prosperous democracy where each and every Kenyan can find their full belonging."