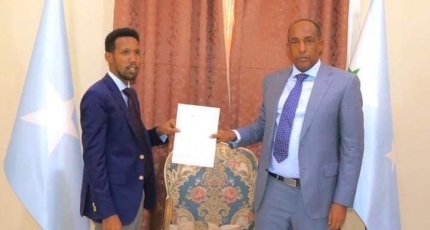 MOGADISHU, Somalia - The acting director of the notorious National Intelligence and Security Agency Yasin Farey has announced his candidacy for a seat in the country's next parliament.

The electoral body has awarded him a candidate certificate while has not qualified some of the conditions set for the race of the parliamentary seat in the ongoing election in Somalia.

The terms violated include Farey had not officially declared his resignation as NISA boss. The candidate must quit any public office three weeks before the registration, per the rules.

Yasin Farey, a close ally of the outgoing president Mohamed Abdullahi Farmajo has been accused of serious crimes, including the murder of Ikran Tahlil, a senior female spy official.

Amid the charges, he was cleared to run for the seat, which he wants to use as a shield to escape from prosecution for his role in the murder of the girl who worked for NISA for 4 years.

On Sunday, a court prosecutor Col Kamey has unveiled a preliminary report on the case of Tahlil, saying that the inquiry team found no evidence that NISA was behind the killing.

Fahad Yasin, the sacked NISA chief, Abdullahi Kulane, and Abdikani Wadna-Qabad were sued in court last September by the family of Ikran, accusing them of executing the young girl.