As we have early informed our visitors that Keydmedia.net will present a program named ‘Somali Today’ in which our visitors will likely find something valuable and very interesting on every Wednesday. The program will be displayed on the website with not only dry articles or features and images but also filmed stories relating to the fact finding acts.
Article Keydmedia Online
3 November 2010 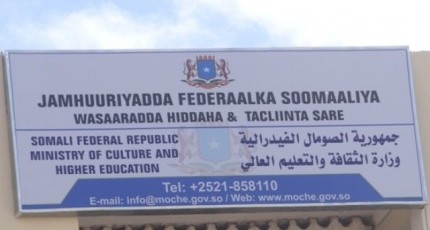 Keydmedia journalist went into Ex-Lafoole university residence where internally displaced people who fled from the capital Mogadishu live right now, our journalist observed the area and assessed the situation of the people in particular if there have been education going ahead yet.

Not only people run away or fled from Mogadishu’s endless fighting between warring parts, but also business centers, health centers, and schools were moved to the out-skirts of the capital Mogadishu as well as Elasha-biyaha and Lafole areas south the capital.

Jibril Foundation Mogadishu boarding School is among schools which used to be in Hodan district in the capital, Mogadishu, but wars between the transitional federal government and Islamist militias affected that led them to be among internally displaced people and schools in Lafole college.

450 students learn at Jibril Foundation and boarding School and 42 of them are boarding students where others come the school in one shift either morning or afternoon and go their homes.


Jibriil Afrax Ayaanle is school manager and founder; he told us that 21 experienced teachers operate his school who are Somalis not foreigners and ready to teach their people with hard task they are in.

The school is English medium and Somali, Arabic and Islamic studies are among the subjects provided at the school, further more lessons with audio-visual could be very important which our staff had set his eyes on during his observation at  Jibriil Foundation & primary and secondary school.

There are no local and internationals agencies that support the Jibril Foundation, but with bravery and citizenship of Mr. Jabril Afrah Ayanle and the moral of the teachers of his colleagues they have to train Somali children.

The school gives respect to the poor children who are unable to pay the school fees and the school doesn’t chase them home as the manager told Keydmedia.net.

“We share the circumstances with poor and internally displaced people in this environment”, Jabril Afrah Ayanle said.

This shows that there is hope to survive Somali children and teach for future, but the warring parts required to stop fighting and give chance to children in order they may learn something as education is the only that change population into high civilized nation.