Nairobi (KON) - If you have a beard or wear loose-fitting clothing associated with Muslims, you will be targeted, Omar bin Omar says as police carried out a security sweep of Somali neighborhoods amid alleged police abuses.
Article Keydmedia Online
19 April 2014 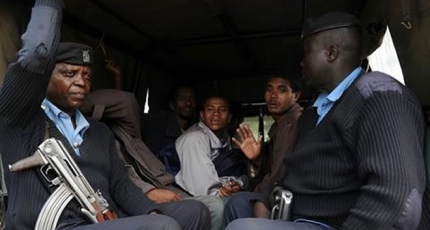 Kenya deported 91 more Somali nationals to Mogadishu Thursday, the second wave of forced deportations that the U.N. refugee agency warned could be endangering Somalis in need of protection from Islamic militants. But it is because of the steady drumbeat of terror attacks blamed on Al-Shabab, an Al-Qaeda-linked group, and its sympathizers that Kenya is waging a massive security operation that threatens to open the country’s ethnic fault lines.

For their part, police say they are not targeting Somalis but instead are hunting terrorism suspects and illegal aliens. Many Kenyans applaud the operation. But rights groups say that during the police actions the Somalis are suffering shakedowns for money and even physical and sexual assaults.

“When you have a beard or you are wearing clothing associated with Islam you are targeted,” said Omar, a resident in the Somali enclave of Eastleigh, a bustling center of commerce. “I shaved my beard and I now wear suits to avoid being arrested.”

When police came to his apartment building early Monday morning, they only targeted residences occupied by Somalis, he said.

The police operation was launched nearly two weeks ago following terror attacks in Nairobi and the coastal city of Mombasa. On March 17, police intercepted a massive car bomb that a U.S. official said had a kill radius of 100 meters. The official insisted on anonymity because he wasn’t authorized to speak publicly.

The Somali militant group Al-Shabab, which is blamed for these attacks, has vowed to retaliate for the presence of Kenyan troops in Somalia. More than 100 explosive attacks have occurred in Kenya – including the September Westgate Mall attack - since October 2011 when it sent troops into Somalia.

Police Chief David Kimaiyo said 91 Somali nationals were sent to Mogadishu Thursday. That follows the deportation of 82 Somalis last week. Hundreds are being held at a central Nairobi sports stadium.

Cedric Barnes of the International Crisis Group said the round-up and mass detentions “deliberately conflated immigration issues with counter-terrorism and has widened dangerous communal divides. Al-Shabab and its extremist allies in Kenya will be very satisfied.”

UNHCR said Thursday the “vast majority” of Somali refugees and asylum seekers in Kenya are law-abiding. Somalis from the country’s south, where Al-Shabab wields authority, still need protection, it said.

“ UNHCR is disturbed by reports of harassment and other abuses,” a statement from the U.N. refugee agency said. “Furthermore, the conditions at Kasarani stadium and in the police stations are overcrowded and sanitary conditions are inadequate.”

Omar said that police, without warrants, knocked on every residence believed to have been occupied by a Somali in his neighborhood. Those who didn’t comply with the searches had their houses broken into and lost property and cash, he said

Omar said he declined to open his door because he did not want to go through another ordeal with police after being arrested Saturday despite having proper documentation. His nephew was arrested and spent five days at the stadium, and was at Omar’s house at the time.

Omar said the police released him Saturday after he paid a $6 bribe. Though shakedowns by police are common, the frequency has increased, he added.

“They don’t have a system to identify persons who have been screened or those who are legally in the country. Different sets of policemen will knock on your door and if you have correct document they will demand a bribe or you can end up spending the night at a police station on trumped-up charges,” Omar said.

Seventeen rights groups said this week that complaints had been received about extortion and sexual harassment of women.

Responding to such allegations, President Uhuru Kenyatta said Thursday that corruption posed a direct threat to the country’s security and that corrupt security officers would be “dealt with ruthlessly.”

Many of the thousands of suspects arrested are taken to the stadium and screened, then charged, deported or released. Rights activist Al-Amin Kimathi said a 40-year-old Somali woman who had been awaiting deportation to Somalia died Thursday in unclear circumstance, possibly from a respiratory disease.

Police said Wednesday that 5,000 arrests had been made. More than 1,100 have been screened at the stadium. Of those, 782 are Somali, police spokesman Masoud Mwinyi said, though he denied that the sweep was profiling Somalis and Muslims.

Omar is fearful of being sent to Somalia, where he says he will be accused of being a spy.

“We came here to bring up our children in dignity to give them a chance at getting an education,” he said. “That dignity we are being denied in Somalia we are also being denied in Kenya. Where do we belong?”