Somalia, Side-effect of an Overpriced ‘Panacea’

By Abukar Arman - With its meager financial and human resources, the Federal Republic of Somalia (FRS) has been doing better than a satisfactory job. However, in recent months, it has been profoundly frustrated by various challenges. Chief among them is what I would refer to as the first side-effect of a $60 million “panacea” known as the provisional constitution — the “Jubbaland” controversy.
Article Keydmedia Online
6 April 2013 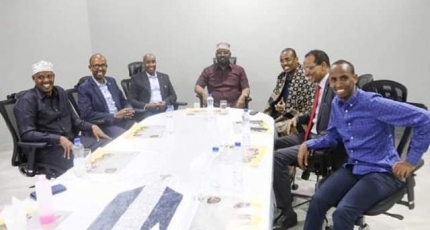 Who has the legitimate right to establish a new federal state by that name? Are the proponents taking an inclusive approach and are employing the right process? And who has the authority of oversight?

Jubbaland has all the dangerous elements necessary to kick the stabilization plan like a sand castle. It has the armed militias, clan-lords and foreign intrusions of competing interests. And it is, by far, the most polarizing issue facing the nation today.

Those who advocate for the establishment of Jubbaland claim that they have, as the constitution permits, two regions (Lower Jubba and Gedo) from pre-civil war regional structure to form a new federal state. They insist that the process that created the apparent front runners was legal and inclusive, and that it they had a clear mandate from IGAD (read Kenya/Ethiopia) to establish a local administration.

The FRS, on the other hand, argues that Somalia is a sovereign nation, that this issue is an internal one and as such does not fall into the domain of authority of any international or a regional institution. The two “willing states” are being brought together through a thinly disguised clan-based gerrymandering that skips an entire region that is geographically located between these two (the Middle Jubba). Lastly, the planned arrangement creates a layer of complexity that could set the stage for renewed clan-based injustices and bloodshed, hence the government’s legal obligation to scrutinize the initiative and process.

While this may, at least in theory, seem like a fairly simple constitutional issue, unfortunately the new constitution is epicenter of all the legal, political, and moral confusions. The constitution not only institutes and legalizes the most discriminatory form of clanism — the infamous 4.5 system — it incentivizes clan-based Balkanization. It has already grandfathered certain clan-based political entities such as Puntland and Galmudug as federal states, and it grants them profound discretions to unilaterally go into any deals with any foreign entity they wish for oil explorations, mining of minerals, etc.

While the constitution is peppered with enough articles to keep the fire burning, it is in these two particular articles that the ghost-lords (the primary force behind it) hit the jackpot. Constitutionally restrict the federal government’s capacity to engage in any bilateral deals on natural resources and allow the federal states to engage as they please. Under such temptation, who — save a few — would be interested in working and sacrificing to save and sustain the state!

Eight months ago, like a few other insightful analysts, I have warned against the danger woven into the new constitution. In an article (bluntly) titled A Constitution of Ambiguity and Deferment, I wrote “if the new parliament does not make the necessary changes as soon as it assumes its responsibilities, the new constitution could, among other things, undermine the profound security and stabilization accomplishments of recent months.”

By and large, human behavior is determined by situations and conditions; by rules and regulations — negotiated or decreed, written or unwritten. Operating within such parameters, human behavior, by and large, is reasonable, or, at least, predictable. Under such scenario, rights, privileges and responsibilities are clear, and therefore sustainable peace and coexistence is possible.

Absence of such parameters, the worst qualities of the human nature takes command, in due course. In its benign form, this premise could be observed in any given busy intersection after the traffic light stopped working.  Gradually but surely, the dysfunctional tendencies of otherwise reasonable human beings would emerge!

The foundation of every peaceful polity or a nation is an unambiguous set of laws or a thoroughly negotiated and ratified social contract. And, as I argued in the aforementioned article, this basic premise could not have been lost on the framers of the current constitution. By “the framers,” I mean certain internal actors, who, due to their naiveté or political myopia, were connived to accept the idea that the best way to sustain peace in Somalia is to put the cart before the horse, and to accept that a dysfunctional constitution that does not clearly define demarcation of authority, or land ownership, or resources-sharing is the legitimate prerequisite to “emerge out of the transitional status.” So, the moral argument that helped pass this embarrassment of a constitution was “Reconciliation can wait. We are sick and tired of being in transition; let’s just accept anything handed to us in order to regain our sovereignty.”

What sovereignty, if the treatment is more or less the same? Sovereignty is not a badge worn as a façade; it is right demanded and protected.

Like the transitional governments before, the current government too is dizzied with seemingly endless meetings in foreign capitals whose primary objective is to ensure the continuation of political musical chairs for foreign interest groups. Behind closed doors; certain elements within the IC still continue their political arm-twisting tactics to pressure the government to concede to the wishes of its powerful neighbors. Needless to say, such dispensations embolden both Kenya and Ethiopia to claim the right to stir the internal politics of Somalia, if not micromanage.

In its latest attempt to extract funds from the international community and expose the security vulnerability of the current government, Ethiopia, abruptly evacuated the town of Hudur without any coordination with the government. This security blackmail has created a vacuum for al-Shabaab to fill immediately and subsequently created massive exodus and vendetta assassinations that included an old imam — religious leader. This stunt seems to have been orchestrated to send a statement to the Second London Conference on Somalia fast approaches. Ethiopia pulled a similar stunt in the town of Baidoa right before the First London Conference on Somalia last year.

Back to Jubbaland: In order to deal with this dangerous dilemma, the Council of Ministers should muster the necessary political will to demand through the right diplomatic channels that all foreign troops in the country must come under AMISOM’s command and control structure. That the Kenyan troops be deployed to Hiiraan region, and the Djiboutian troops to Lower Jubba. Likewise, the Ethiopian troops in Gedo, Bay and Bakool be transferred to Mogadishu and Banadir area (under the Ugandan leadership) and be replaced by equivalent portions of the Ugandan and Burundian troops. This, I believe, would be the litmus test to ascertain whether or not Kenya and Ethiopian interventions are driven solely by the neighborly objective of assisting in the stabilization of Somalia.

So long as Ethiopia and Kenya are allowed to continue in their current arrangements; the one step forward and one step backward would continue.

Lastly, since the matter at hand cannot be remedied by judiciary intervention as that branch is currently undergoing revamping process and this matter needs more than constitutional interpretation, Parliament has the duty to step in to deescalate the steadily mounting clan tension, and fix the constitution. As an institution that includes practically all Somali clans, the parliament indeed has the legitimate authority.

Speaker Mohamed Osman Jawari and all MPs who are willing to put the nation’s interest above personal, clan and regional should take this bull by the horns.