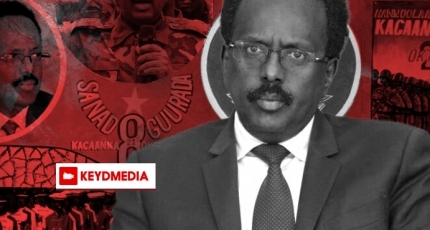 The international community is solely responsible for the current election impasse and political crisis in Somalia because it is one of its major duties to make sure that former president of Somalia, Mohamed Abdullahi Farmajo, holds fair and free election on time with peaceful transfer of power. Mr. Farmajo is not independent president to endanger the electoral process of the country and to develop personal whim for brutal dictatorship as long as he is guarded and financed by the international community.

The former president of Somalia, Mohamed Abdullahi Farmajo, is suspect of murder for ordering his security forces to attack and murder two previous presidents of Somalia, Sharif Sheikh Ahmed and Hassan Sheikh Mohamoud on the evening of February 18, 2021. He also ordered his security forces to open fire on peaceful rally held on February 19, 2021 in Mogadishu killing innocent civilians and inflicting injuries on others including three presidential candidates, Abdirahman Abdishakur, Hassan Ali Khare, Abdikareem Hussein Guled and parliamentary member Mahad Salad. All these candidates and killed civilians belong to the dominant clan in Mogadishu, Hawiye Clan.

The population of Mogadishu is about 3-4 millions and 85-90% of it is Hawiye. The other tribes living in the capital are fleeing the city these days for fear of their lives. What the former president, Mr. Farmajo, did on February 18-19, 2021 was a coup to subdue Hawiye for his dictatorship. He turned the weapons given to the country to defeat Al-Shabab against the civilian population of Mogadishu. Al-Shabab is much stronger since Farmajo came to power. Instead of fighting them, he saved the weapons for dictatorship.

If the international community want peace, stability and democratic elections on time for Somalia, why do they still keep former president of Somalia, Mr. Farmajo, in office after being out-of-mandate since February 8, 2021 and also after being murder suspect of committing crimes against innocent people? The international community in Mogadishu also knows well that he was blocking democratic presidential elections for almost three years for having dictatorship in mind and was ignored. There is some suspicion in Mogadishu that UN Ambassador, James Swan, and US Ambassador Donald Yamamoto are close friends to former president of Somalia, Mohamed Abdullahi Farmajo, and he still in the office with their pleasure but there is no evidence.

Because former president of Somalia, Mr. Farmajo, is suspect of crimes, he loses all rights of holding talks or being candidate in coming elections. He should accept all the terms that the international community dictates to him as ordinary citizens and caretaker government should be formed as soon as possible with the help of international Community to prepare the country for democratic elections without his participation and influence. Former president of Somalia, Mr. Farmajo, is committed dictator and should be under watch and surveillance by the international community.

Having seen the precarious situation in Mogadishu and the high probability of civil wars eruptions, the followings are recommended to prevent impending disastrous dictatorship in Somalia