Keydmedia Online - Dr. Mohamed Warsame 'Kimiko' - « Previous Page | This book is an attempt to present a brief but yet complete and clear picture of the socio-political landscape of Somalia and offer some concrete suggestions that will solve the country’s seemingly intractable political crisis.
Editorial Keydmedia Online
19 August 2014 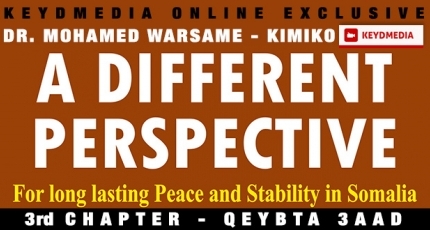 This book analyses each of the current major components of the people now playing in the field; the Warlords, the Civil Society and the Clan System; it provides a historical background of the problem and the players; it evaluates the results of the 14 months of running the Conference; it identifies the player best suited to provide a solution to the problems and recommends specific approaches and procedures. Most importantly, it intends to create an interest for more serious and scientifically oriented reconsideration of the Somali question as a whole. Context and justification The objective of peace and stability could be attained if the most appropriate institution in the Somali society is used with the right approach. It would seem that, up to now, the well-meaning international community has been seeking a solution to the Somali problems in the wilderness, without even identifying the instrument best suited for conflict resolution in the society. All efforts have yielded little or no tangible results probably because nobody has ever conducted the necessary in-depth and comprehensive studies required, covering all aspects of the problem including the socio-political environment and the players. Unique problems require unique solutions None of the twenty or more odd countries that got involved in the reconciliation processes over the last decade have faced a situation that bears any meaningful resemblance to that of Somalia. Indeed countries like Mozambique, Tajikistani, Sudan, Sierra Leone, Georgia, Guinea-Bissau, Guatemala, Croatia, El Salvador, Democratic Republic of the Congo, Cambodia, Burundi, Afghanistan, Macedonia, Papua New Guinea, and the latest, the Ivory Coast, have had some sort of a challenge to government from armed opposition group/groups. The few exceptions of Liberia, Lebanon, Northern Ireland, Bosnia-Herzegovina, and Kosovo, have involved some ascertainable parties with discernible cause for conflict i.e. ethnic, religious, territory, etc. In the case of Somalia, however, the similarities end at the death and destruction aspects only. A cursory look at Somalia’s situation reveals certain peculiarities that include:

There is an unrelenting anarchy that has lasted for over a decade and there is no government or groups/leader to constitute the focal point or center; There is no traditional war in the real sense of the word; the fights are multifarious and are conducted by many groups at multiple levels; There are no territorial, ethnic, religious, ideological, or any other discernible differences to be resolved; There are faction leaders who came out by default and who possess neither legitimacy nor strength of their own to prevail on the others. With no power or political program they indeed represent a big stumbling block on the way to resolving the conflict; There is a traumatized and hapless population incapable of identifying or visualizing who their real enemies are, and who cannot understand why and for whom they are fighting for, when called upon.
As indicated in Box 1, the people are psychologically and mentally imprisoned in a vicious circle, incapable of organizing themselves to find solutions to their problems. This is compounded by the fact that the Somali landscape is characterized by fear from mostly imaginary enemies and mutual mistrust between and among the clans and factions, clearly, many a time their logic of the heart prevails that of intellect. Unlike other conflicts, there is no major power seriously committed to help in the solution of Somalia’s crisis. The international community’s involvement so far has been primarily confined to humanitarian issues. The facts represent, no doubt, a serious challenge to both the Somalis and the members of the international community including the IGAD member States who are busy resolving the crisis. The problems, however serious they seem to be are not insurmountable if considered in their proper perspective and addressed with the right approach. It is important that in reaching a proper resolution to the Somali crisis, certain requirements be considered, analyzed, measured and satisfied within the proper context of Somalia’s peculiar circumstances. Next Chapter: The Role of Warlords in Exacerbating Crisis By Dr. Mohamed Warsame - Kimiko - Keydmedia Online Exclusive Dr. Kimiko is a Somali politician and diplomat. He has occupied various diplomatic posts in Somalia since independence in 1960, including Somali Ambassador to the United States in 1980.
Comments