Mohamud M Uluso — The accusations for corruption and abetting terrorism against the federal government gained momentum and credence for the discovery of substantive evidence.
Editorial Keydmedia Online
17 August 2014 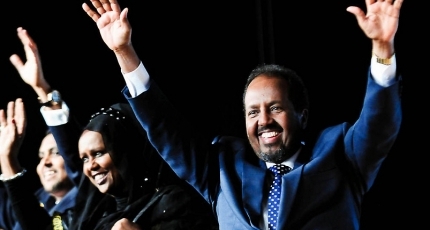 The basis of the accusations is the improper relationship between the President and the US Law Firm through a predatory and attorney-client contract, the role played by two private intermediaries of Somali origin- Abdiaziz Hassan Giyaajo Amalo and Muse Haji Mohamed Ganjab, breach of separation of power, abuse of presidential power to discredit the integrity of former Governor Yussur Abrar, and use of public funds to defend former governor, Abdusalam H. Omer. The findings of 2013 and 2014 UN-SEMG reports impair the leadership credibility of the federal government in peacebuilding and statebuilding in Somalia.

President Hassan bought into one of two old irresistible but dirty and tricky financial transactions that have tantalized his predecessors. The two deals are the Printing of New Somali Currency and the Recovery of Overseas Assets. It was an ill-considered priority and mission taken either for ill-advice, greed, or brazenness.

The fundamental problem with the two deals is the absence of economic, political, and legal framework and institutional capability, all necessary conditions to credibly and properly undertake those deals as well as of the concerted pernicious efforts by top leaders of Somali Governments to circumvent the distinct role of the Central Bank. In response to an inquiry about my knowledge of frozen overseas assets, I advised the federal government against undertaking such enterprise before the institutional capacity of the CBS and ability of the federal government to enforce the rule of law are satisfactory at least in South Central Somalia. Receiving secret funds provides incentives for misappropriation and inflated claims for compensation.

For disclosure, I refused twice to sign on these two deals and requested the respect of the fiduciary responsibility of the Governor of the Central Bank of Somalia (CBS) on behalf of the people of Somalia, which is a critical element for statebuilding in Somalia. The reaction was summary dismissal and transfer of CBS responsibilities to the ministers of finance, foreign affairs, national planning and international cooperation, and United Nations Development Program (UNDP).

The claim that De La Rue, a UK Banknotes Printer, owes US$ 14 millions as a recoverable asset belies available information because De La Rue has been looking ways to get paid for the Somali Banknotes  printed to the CBS  and in its warehouse since 1990. De La Rue acted always carefully and responsibly.

Since 2000, the issue of recovery of the overseas assets of Somalia has been the credential and advantage claimed by the last governor of the collapsed regime of Mohamed Siad Barre in 1991, Mr. Ali Abdi Amalo for deserving to be appointed as  Governor of CBS because he had the information of whereabouts of the frozen Somali financial assets. The implicit message has been that the Asset Recovery will yield huge financial pie-cutting to top leaders.

Sadly, emails quoted in UN SEMG report corroborate rumors within the Somali Community that the asset recovery transaction has stirred up feud within Amalo family and between Former Prime Minister Abdi Farah Shirdon and President Hassan. In addition, in another email, former Presidential Special Envoy to US, Abukar Arman, has been attacked, most probably for refusing to be part of the initial contract between the Transitional Federal Government of Sheikh Sharif Sheikh Ahmed and Shulman Rogers.

So far, it appears that the principal beneficiaries of Asset Recovery Transaction are the foreign firms and their Somali associates while the Somali people could face future debt burden. Current and Former Finance Ministers Hussein Abdi Halane and Mohamud Hassan Soleiman, former and current governors of CBS Yussur Abrar and Bashir Isse Ali emerged as whistleblowers and honorees.

It is important to note that the use of the headline “recovery of Somali Assets” is misleading. According to United Nations Convention against corruption and the World Bank Guidelines, Asset Recovery which consists of tracing, freezing, confiscation, and repatriation of Assets refers to the process of recovering the proceeds of corruption hidden in foreign countries. On the contrary, Somalia’s Assets have been frozen by the Western institutions immediately after the collapse of the Somali State for good reasons that exist until today. For example, the US Government sold the Somali Embassy residence in Washington, D.C. and kept the proceeds in an interest bearing account under the control of US Treasury Department.

The necessary condition to reclaim Somalia’s overseas assets was the emergence of national government that legitimately represents the people and controls the country of Somalia and that has earned the recognition of the international community in accordance with Article 1 of Montevideo Convention on the Rights and Duties of States. As the CBS capacity permits, the reclaim of overseas financial assets is the responsibility of the CBS of Somalia in cooperation with the Ministries of Finance and Foreign Affairs under the supervision of the Prime Minister, Parliament, and President for transparency and accountability.

The aggressive focus on Overseas Assets by the federal government of Somalia without transparent and accountable political, legal, and administrative processes has stoked public outcry for corruption and possibly attracted the attention of UN for investigation. Rationally, the highest priority and challenge of the Federal Government for earning domestic and international credibility was to manage transparently and properly the US$ 216 million dollars appropriated in 2014 fiscal budget.

Another issue not considered in the asset recovery process is “to whom the overseas assets belong?” In general, the pre-1991 CBS has been carrying out both Central Bank and Commercial Bank functions. Therefore, there may be claims by third parties against overseas assets. The inclusion of gold and hard currency Reserve in the asset recovery is ludicrous and unacceptable.

The UN-SEMG report notes that Shulman Rogers declared the recovery of US$ 12,326,971.63 of which US$ 9,001,092.00 has been deposited in Agricultural Bank in Turkey. The Difference of US$ 3,325,879.63 was pocketed by Schulman Rogers for 11% fee, reimbursement of expenses, bonus, retention fee, and payments to third party vendors. The account of separate amount of US$ 3,878,893.50 identified for recovery has not been disclosed. In addition, the CBS wired from Mogadishu US$ 982, 913.38  to Shulman Rogers for payment of the report that defended former Governor of the CBS Abdusalam Omer from  corruption accusations contained in July 2013 UN-SEMG report.

Under the terrorism accusation, as preliminary notice, the report notifies the procurement of Arms to Al Shabab Leader Ahmed Godane and President of Galmudug State, General Abdi Qaybdid with the knowledge of President Hassan and involvement of Hoden Global Services. This revives an alliance relation between Al Shabab and the Federal Government.

On August 12, Jeremy Schulman of  Law Firm Shulman Rogers held a press conference in Minneapolis, MN characterizing the accusations in the UN-SEMG report  false and malicious, and ragingly attacked Jarat Chopra, Chairman of the UN team .  In my opinion, the press conference did not help the case of the federal government and provided new ammunition to UN-SEMG by declaring the recovery of assets totaling US$ 33 million and failing to provide  satisfactory rebuttal. The knowledge of the absence of functional Central Bank was sufficient red flag to not enter into Power Attorney contract with President Hassan.