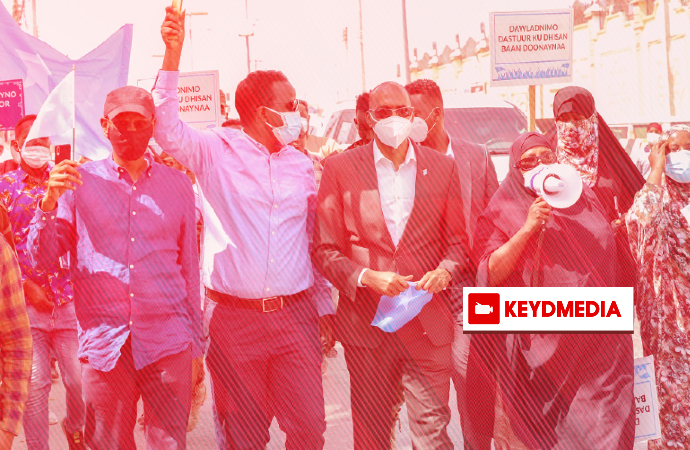 As a human rights activist and someone who worked in Somalia in recent years and has been in constant communication with health care workers and members of the civil societies there, I can affirm that the Somali people are struggling to manage the resurgence of the deadly second wave of COVID-19. This, unfortunately, came at an election year and at the peak of Somalia political dispute between the Central government and two of the federal states on one hand, and the Central government and the opposition on the other hand. It is the season when resources of the government and the opposition are routinely and exclusively allocated for political contention instead of putting the pandemic on top priority.

Sadly, the deadly COVID-19 is becoming a political football between people who see it as an opportunity for one end or another. Other than issuing artificial statements of concern, none of these political contenders has forged a serious strategy to fight this deadly disease. In a country where an estimate of 70 percent of the population is jobless and over one million people are internally displaced people (IDPs), poverty is a glaring reality, and drought and famine are looming in some regions, the situation is very desperate, to say the least.

The Federal government, regional states, and the opposition groups must collectively and urgently prioritize the protection of civilians who are desperately struggling to survive the second wave of this pandemic. This deadly virus coupled with an already crippled health care system, paves the way for a fatal consequence not only upon the Somali citizen but also on the Somali nation.

Going back to the core contentious, we have two competing issues:  the first and most immediate contentious issue is whether or not a peaceful demonstration against the current government could take place in Mogadishu. As I expressed in the opening lines, the answer is yes. But that yes must be handled responsibly.

The second and the long-standing issue is the deadlock over the election process. This protracted deadlock is related to who wheels the power of the selection process. More specifically, the competing sides quarrel over who manages the processes of the election in the Gedo region and the Somaliland future parliamentarians and, more critically, the legitimacy of the electoral model and members of the electoral commission. Despite the September 17, 2020 election agreement signed by all sides, the Jubaland and Puntland leadership have consistently refused its implementation. On their part, the Federal government which considered the said agreement favored the federal states, has been giving it lip service, at best.

With the foregoing and as someone dedicated to fairness and the cause of saving Somalia and her citizens, I strongly encourage the contending parties to exercise restraint and give wisdom and the love of the country the chance to prevail. Further, I appeal to the Central government, federal states, and the members of the opposition to consider the following:

1. There has to be a mechanism in place to safeguard the safety and security of the protesters

2. Spoilers, both domestic and foreign actors, must not be allowed to take advantage of the prevailing disagreement and exploit the demonstrations as a venue and as a platform to implement evil destructive intentions

3. The government’s security forces must not intervene, in any way, in a peaceful demonstration.  If any such intervention is warranted, it has to be only to stop violent groups from taking advantage of this civic engagement

4. To pursue the above, it is important to form a committee comprising relevant government institutions, opposition, civil society, AMISOM to oversee peaceful demonstrations to happen

5. In addition, protesters have to be educated on the precautionary measures to prevent the spread of the COVID-19.  FM radios, TVs & social media can be used to inform and encourage protesters to practice safety measures and to encourage anyone with signs of infection to stay home.

6. Arrangements must be made to provide masks, hand sanitizers to the protesters and to encourage social distancing.

With regard to resolving the existing dispute and conducting free and fair elections:

1. There is a need for a political continuity to avoid political vacuum and safeguard stability. Constitutional bodies (the executive and the legislative) need to remain until elections take place and new leadership is elected.

2. To break the deadlock and as a compromise, an inclusive and independent body may be instituted to guide the process around the elections, including validation of the electoral commission and setting an election timetable and resolving other outstanding disagreements. The formation and composition of this body have to be done consultatively.

3. Last but not the least, individuals seeking presidential election including the incumbent and other candidates, will have to stay away from direct involvement in decisions affecting the outcome of the elections.

The critical situation at hand tests the leadership capacity of all sides. At the end of the day what would matter is not who won or who lost, but how many lives were saved by their compromise.

Dr. Sadia Ali Aden is a Humanitarian Activist and a Freelance Writer