Mary Harper — Al-Shabab, the militant Islamist group operating in Somalia and Kenya, likes to communicate with journalists by SMS. But receiving their text messages and talking to them on the phone can be an unnerving, and at times surreal, experience.
Article Keydmedia Online
17 August 2014 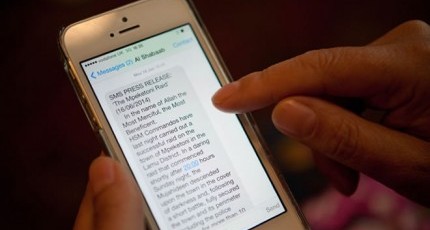 The other morning I woke up to a text message and missed call from al-Shabab.

As always, the message was written in perfect English. It informed me about a film al-Shabab has made called Beyond the Shadows. It said the film gave an "accurate portrayal" of what happened when French commandoes last year tried - and failed - to rescue a suspected French intelligence agent held hostage by the group.

A few days later I got another call from al-Shabab. The clear, relaxed voice on the other end of the phone told me I was about to receive a text message about the group's role in the killing of a senior police official in Somalia earlier that day.

Sure enough, a few seconds later the text message arrived. Then came a second call to confirm I had indeed received the message.

This is the usual pattern. A call, a text message, then another call to check the message - or the SMS press release, as al-Shabab calls it - has arrived.

Scrolling through these messages on my phone, I can chart the history of al-Shabab attacks.

Many of the recent ones are in Kenya. One five-part message, written in the style of a news agency report, claims responsibility for anattack on a restaurant in Djibouti popular with foreigners (or, as al-Shabab calls them, "Western crusaders").

I have seen al-Shabab's violence at close hand.

Earlier this year, I was just a few buildings down from the Jazeera Palace Hotel in the Somali capital, Mogadishu, when it was attacked, first by one suicide car bomber, then another, who waited for the emergency services to arrive before driving his vehicle into them and the hotel to ensure maximum casualties.

The blasts from the exploding cars were huge. Bullets cracked down the street as the security forces tried to beat back al-Shabab fighters who had come - in a minibus, I was told - to try and storm the hotel. In the middle of all this, the main target of the attack - a senior security official - came with his entourage to the place where I was. We set up a circle of chairs for them, and they sat there like statues, in stunned, stony silence.

I sometimes find it difficult to relate these acts of extreme and terrifying violence to the calm, measured voice of the al-Shabab official on the other end of the phone - to the precise, clinical wording of those text messages.

What started as brief calls about particular attacks have over time developed into longer, wider discussions about the movement's practices and philosophies.

Sometimes there is room for debate. But when I ask about certain subjects - the treatment of spies or adulterers for example - the tone of voice changes. It becomes cold and mechanical, as if the words are learned by rote.

I had the conversation about spies one lazy Sunday morning when I was still in bed.

I got a call from al-Shabab, and as I sat in my safe, comfortable bedroom, I heard the voice say: "If you are found guilty of spying, there is only one punishment. You will face the firing squad in a public place. Everybody must witness the killing of a spy. The spy must receive three, four or five bullets to the head."

But perhaps the strangest conversation I had was one sunny day outside the Houses of Parliament in London.

I was due to attend an event there but as I was early, I was sitting in a park outside, in the shade of those grand buildings. My phone rang. I saw the words al-Shabab flash on to my screen. What started as an update on the latest attack on the Kenyan coast ended up as a lecture about my faith.

"Have you thought about the afterlife?" asked the official. "You know, Mary, you won't be around in 20, 30, 40 years' time. I seriously recommend you consider converting to Islam," he added. This man seemed genuinely concerned, as he urged me in a gentle voice to take up the Muslim faith.

All the time, images of people I know or have known, who have been caught up in al-Shabab attacks, flashed before my eyes.

Some of them are now dead. Others have suffered horrific physical injuries, like a politician I met whose body was ripped apart in an explosion. His black skin is now mottled with raw, angry, bright pink scars. He can't hear anything now because of the damage the blast did to his ears.

Others don't bear any physical scars but jump every time they hear a bang, even if it's just a door. They shudder when they walk past a parked car in Mogadishu, afraid it might explode. Their hearts miss a beat whenever someone they don't know approaches them for fear they might be a suicide bomber.

They, like me, have received texts from al-Shabab, only the nature of the messages is very different, as they often contain death threats.

I never quite know when I am going to receive the next message from al-Shabab.

I might be on holiday with family, having supper with friends, when all of a sudden, a text message will burst on to my screen, bringing two very different worlds into sharp collision.