ABDI LATIF EGA — Twitter is abuzz and Somalis are trending in Kenya, not for reasons of their own, but rather impositions beyond their capacity. There is quite a lot of outrage from all corners that Kenyans venture, from the passionately human to the average reactionary comments in “ full support” (“remove them”) of the state.
Editorial Keydmedia Online
10 April 2014 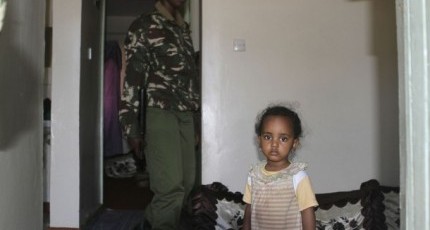 The police chief has dubbed this “operation sanitize” and the media as usual in Kenya has a penchant for rather crude and unconscionable fascist statements towards Somali, Somalia and everything Somali, Kenyan ethnicity notwithstanding. Chime in the police who have dubbed Somalis ATM machines.

The Kenyan Defense Force is in Somalia exerting its right to military voyeurism; the current vogue in Africa as usual at the behest of America’s Africa Command. Ask anyone in Eastleigh, the densely Somali populated area, if they can remember any year before or after the collapse of Somalia where there has not been a Musako (mass arrest). They will most likely say it has just been intensified from 1991 onwards.

Naturally, Eastleigh a historic Somali residential area (circa early 20th century), became host to their kith and kin from across the border. Their citizenship then and now has always been treacherous. However, the rather astonishing enterprise of these “refugees” has transformed this quiet residential area into a strategic business hub for the entire East Africa and beyond. Real estate prices rival the choice downtown areas of the city. Looking at the massive buildings, hotels and malls in contrast to the moonlike crater impassable roads gives one the quick impression that the private sector has outstripped the stagnant public one. Somali enterprise post-collapse is also ascribed to a rather rabid islamophobic interpretation by the media bordering on the fantastic, rather than lauding original African do-for-self initiatives.

At the 1945 Pan African Congress in Manchester, the father of current Kenyan president Uhuru Kenyatta, Jomo Kenyatta, sat during the proceedings representing the Kikuyu Central Association and not what became Kenya later. By 1963 he had become the first president of Kenya, foremost within his rhetorical arsenal was the eradication of the colonial pass (Kipande). Ironically today the pass, now called national ID is alive and well. It is the cherished ATM card too access money from the Somali and others, by the police.

Within this new African nation state was the Northern Frontier District, bundling over the ethically Somali region and people into this new entity, what became one of the largest regions of Kenya. This region is predominantly ethnically Somali. The region has been the primary exercise ground for internal repression by every means. The Wagala massacre being of note, it remains dismally barren in many things  normalized in the rest of Kenya, including violent repression from their own military of Kenya. The state of emergency, although lifted in paper in 1992, continues to govern relations to this day. Years later, after Somalia’s 1991 collapse, Dadaab, the now well known refugee camp, is located here. This camp, secluded from the rest of Kenyan areas, were born a generation who never knew Somalia, nor were they educated in anything other than the normal Kenyan school curriculum (which does not go beyond secondary school at Dadaab). To this camp and another in Kakuma, all “bonafide” refugees are confined. Simply, you were either part of and included in the rolls of these two camps, or you were in limbo.

From 1991 to the present crisis where thousands of Somalis, (disproportionately) the poor, including women and children, were and are currently interned at the city soccer stadium are part of this continued status limbo – neither citizen, refugee or human. The current arrest is yet another one of the numerous onslaughts from the day they set ground in urban areas to the current situation. With a nod from the UNHCR and international/local NGOS, the police have shown complete impunity on Somali refugees from their first arrival, and earlier on the indigenous Somali inhabitants of Eastleigh, where naturally the multitudes who legally under international refugee sanction came in search of safety and a better livelihood. Eastleigh a historically Somali residential area dating as far back as the beginnings of Nairobi, a colonial city established as a half way point for a railway from the coast to Uganda. Somalis are part of the formative landscape of this city from the late 19th century. The current Kenyan imaginary, hard driven by the media, is that Eastleigh is just another country at our door step, the barbarians at the gate. Somalis, being Muslims, have an added denigration in a country where another religious fundamentalism is very much alive and unscrutinized. Kenyan presidents attend mass on Sundays publicized on national television.

Those arrested and put in what is being called #KassaraniConcentrationCamp on Twitter, despite the outrage, has been the general condition of the urban and hinterland Somali in Kenya. Kassarani is a newer version of Dadaab, a generational concentration camp.  Dabaab, despite being home to a generation born after Somalia’s collapse, is a law unto itself, it defies the laws of nature. It is a place that interns Somalis with the great endorsement of the UNHCR, as a perpetual Somalia. The governments of Somalia, Kenya, and the UNHCR have recently signed a tri-partite agreement to “repatriate” Somalis born in Dadaab and other camps, but back to where? Of course there is the rhetorical fine print which unequivocally states that it is by one’s own volition. Amnesty International and others have clearly stated their reservations, not critiquing the plausibility of repatriation, but rather the guarantee of safety and livelihood. On the other hand, the refugees themselves have decided living in Somalia without safety is perhaps a better preposition than living in the shadows of urban Eastleigh.

Looking back at the arrests, pillage and rape of Somalis in the urban setting through the years, it has been endorsed through silence and the UNHCR’s collusion – that one who is not confined to a perpetual and abstract Somalia is indeed in a state of limbo.  Here there is no protection from the very same perpetual limbo. The government is saying today, “not in camp,” not anywhere, despite the charter allowing for movement and seeking a better livelihood beyond even one country. This despite the apparent dynamism of the “refugee,” who has done wonders in mainstream Kenya.

All of this has returned the Somali to a key figure, or an othered African personality, the terrorist, since the Westgate incident and numerous threats and the recent exploitation in Eastleigh. The Kenyan government has very much suspended, through the rule of exception, the rights of Kenyan Muslims. There have been running battles between the historically disenfranchised Muslim citizens who inhabit the coastal region, and the state security apparatus, such as the extrajudicial killings by mysterious death squads, violent forays into mosques in Mombasa, and the ransacking of Eastleigh. The marquee terrorist lurking within an otherwise pristine Kenyan landscape are all of Kenya’s Muslim inhabitants. The reactionary islamphobia targeting Muslims by the government, with either tacit silence or vociferous approval similar to post-9/11 America’s unrelenting patriotic jingoism and xenophobia, became the unquestionable position for everyone, especially the forth estate.

The hold over image of the pirate from the War on Terror is the media’s very own mythology, this latter day anachronistic African figure in the form of a Somali. Add to this the frequent usage of the terms terrorist and warlord, all serving to make it difficult to even extricate the human from the Somali refugee, in a land that is fraught with overly deterministic mythologies about ethnicities in general. The media is aware of its part in the reportage of these very same ethnic mythologies and the part this played in the violent post-2008 election mayhem in Kenya, and all agreed to be extremely cautious when it came to the very same mythologies. However, in the case of their fellow citizens who are Somali, it seems this does not apply. The unfortunate and often dehumanizing myths predicated on grouping an entire people as one of these three things are entirely opportune to render the Somali without any form of humanity. The Somali is curiously at best an unfathomable entity, with important office bearers somehow detached and othered from their Somali ethnicity. For their own political expedience, they are often government stalwarts and career politicians with a seemingly hostage constituency. Hostage because it defeats logic when you historically elect an official that vigorously maintains the status quo when your region remains entirely out of it.

The almost twenty plus years of persecution and imposed limbo status of both the citizenship and refugee condition of Somalis in Kenya is in itself a crime against human dignity. The UNHCR policy of ghetto camps in perpetuity defies its own mantra, which allows for the freedom of movement outside these internment camps the world over. A better way is to learn and adapt to the realities of refugees rather than impositions that are thoughtless and contradict what is human.

Latif Ega is a Somali novelist/scholar and the author of Guban. You can follow him on Twitter @Gubanburnt.