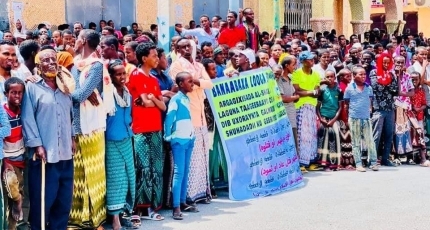 MOGADISHU, Somalia - Hundreds of people, including women took to the streets of Galkayo on Wednesday morning, in a rare demonstration against Al-Shabaab, the Al-Qaeda-linked terror group based in Somalia.

The minister of information for Galmudug state Ahmed Shire Falagle and officials from the city's administration and security agencies, as well as religious leaders and traditional elders, spoke to the protesters at a square, calling on them to show support the Somali forces battling against Al-Shabaab in Mudug region.

The angry demonstrators from all walks of life carried banners with slogans showing their hatred for the Al-Qaeda-linked group behind the massacre of the people of Somalia.

KON's reporter in the city says businesses and educational institutions were shut down because of the rally as the people are outraged by Tuesday's Al-Shabaab attack on Amara, south of the Mudug region, where the militants killed dozens of soldiers.

Amara is one of several villages that fell to Somali troops and Galmudug state soldiers last month after massive operations that forced Al-Shabaab fighters to flee their bases.

On Monday, the U.S. military carried out an airstrike on a convoy of Al-Shabaab returning from Amara following the base attack. The drone strike left militants dead, per military sources.

Al-Shabaab has been at war with the Somali government for the past 10 years, carrying out lethal attacks, including the Oct. 14 truck bombing at K-5 junction in Mogadishu that killed nearly 1,000 civilians, making it the deadliest in the country's history.