The terrorist group has captured a key town in the region early this month after the allied troops abandoned their bases without a fight. 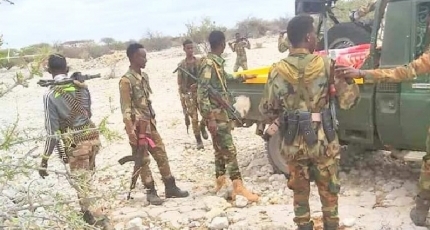 GALKAYO, Somalia - The Somali National Army (SNA) along with the Galmudug state's Darwish have launched an operation in the southern Mudug region where Al-Shabaab has been making territorial gains in recent clashes.

A military official confirmed to Keydmedia English that the offensive is aimed to retake small villages held by the terrorist group south of the embattled region in central Somalia.

The allied SNA and regional troops encountered resistance from Al-Shabaab in the outskirts of Dhaghaye and Hareeri Dheere areas, sparking a heavy battle that forced many residents to flee their houses.

The officials who are leading the operation said that their aim is to ensure the security of the southern areas of the Mudug region where Al-Shabaab is active and was planning attacks against military bases.

The ongoing operation comes at a time when there have been intermittent clashes between the Somali government and Galmudug forces on one side and Al-Shabaab in recent weeks.