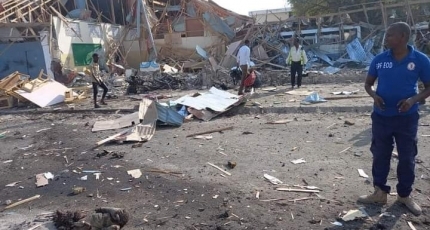 MOGADISHU, Somalia - A powerful explosion has rocked Mogadishu, the Somali capital on Thursday morning, the second terrorist bombing in a week happening amid elections.

Abdifatah Aden Hassan, the spokesman of Somali police has confirmed at least 8 people were killed and 17 others hurt in the car bomb attack on the UN convoy near Tarabunka junction.

"On Thursday morning at 07: 32hrs a car bomb exploded at the intersection of the Tarabunka and Ex Abdiqasim presidential palace especially in the front of Mo'asir School which is opposite Banadir High School. The blast was used Surf Toyota packed with explosives driving from Tarabunka direction and hit Duguf security forces escorting UN convoy," he said.

The explosion sent plumes of white smoke into the sky and was followed by gunfire, according to the eyewitnesses. The bomb has destroyed Mo'asir School complex along the street.

In the aftermath of the blast, ambulances and police arrived at the scene and rushed the wounded and dead to nearby hospitals. Al-Shabaab has claimed responsibility for the bombing.

In a statement posted on its mouthpiece online sites, the terror group has said the bomber rammed his explosives-laden car into a convoy carrying foreign military trainers left Gen Gordon's base and heading to Halane, the HQs of AMISOM and western diplomatic missions, including the U.S., UK, EU, and UN.

Footage taken from the scene showed the scale of the destruction, including collapsed walks of school and business buildings. The area was cordoned off by the Somali police.

The city's security is worsening as the government turned all attention to the ongoing election that gave Al-Shabaab a chance to stage car bomb attacks and targeted assassinations.