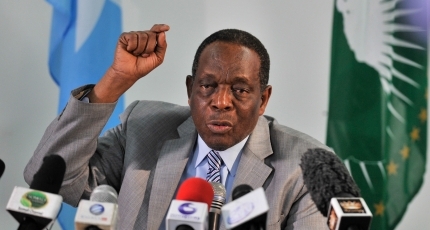 MOGADISHU, Somalia - The AU mission in Somalia [AMISOM] has said in a statement that it will launch an investigation after several innocent civilians were killed in Kenyan military airstrikes on residential areas in the Gedo region.

AMISOM said it has received a report from Somalia's ministry of information alleging Kenyan forces under the AU of airstrikes against the unarmed residents in the El Adde area, where at least three people, including a woman and children, were murdered.

The mission announced that it is gathering information on the KDF aerial bombardment in collaboration with the ministry of foreign affairs of Somalia and other relevant stakeholders as an investigation was launched into the civilians killing.

"AMISOM shall fully investigate the alleged incident and the finding shall be shared with all relevant stakeholders," said AMISOM in a statement seen by Keydmedia Online Engish Service.

The Kenyan forces estimated at nearly 4,000 soldiers who are protecting Ahmed Madobe, the leader of Jubaland in the southern port city of Kismayo face charges of human rights violations and mass murder of civilians in Lower Juba and Gedo regions.

Keyna has been in a diplomatic tussle with Somalia's Federal Government over the Indian Ocean maritime boundary dispute since 2014 after Mogadishu submitted a lawsuit against Nairobi to ICJ after the two sides failed to resolve their rift through dialogue.