The officer wounded in the bombing was idenrified as First lieutenant Abdi Gagal who was admitted to a hospital. The defence ministry is yet to comment on the casulaty figures. 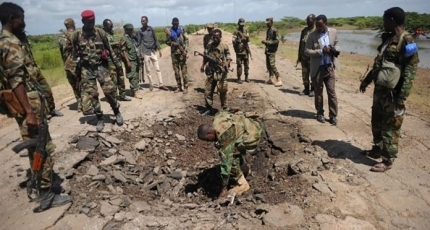 MOGADISHU, Somalia - An explosion from a landmine killed several government soldiers in the No.50 area under Marka, a port city that serves as the capital of the Lower Shabelle region.

The blast hit a convoy carrying troops from the Gogor brigade of the Somali military which left Mogadishu on Wednesday and headed towards Janale town which was liberated from Al-Shabaab.

Multiple reports from the area indicate that a senior commander and other soldiers were also wounded in the IED attack that ripped through the convoy of soldiers who recently completed training at a Turkish camp in southern Mogadishu called TURSOM which was opened in 2017.

The officer wounded in the bombing was identified as First lieutenant Abdi Gagal who was admitted to a hospital. The defense ministry is yet to comment on the casualty figures.

Al-Shabaab has claimed responsibility for the ambush but did not provide details about the casualties. There was an exchange of gunfire after the explosion, according to the residents.

The Somali military often experiences roadside bomb explosions on the road that connects Mogadishu to Lower Shabelle, the most militarized region, where the troops from SNA, AU, and AFRICOM are battling against Al-Shabaab.

Al-Shabaab despite facing defeats, continues to hold swathes of territory in the south and central Somalia and carrying out deadly bombings in the capital and at military bases in the country.

The US military has recently resumed the counter-terrorism operations in Somalia using drones to strike Al-Shabaab bases in the country, killing dozens of militants since May when Biden gave the Pentagon the green light to re-deploy hundreds of soldiers to the country after a year.