No group has claimed responsibility for the bombing, but it bore the hallmarks of previous Al-Shabaab attacks in Mogadishu. 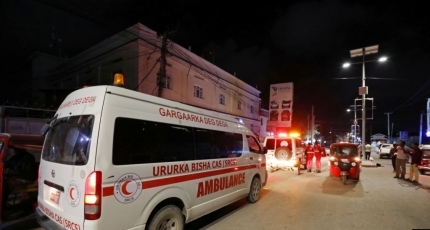 MOGADISHU, Somalia - At least 8 people were killed and over 5 wounded in an explosion that rocked Mogadishu, the Somali capital on Monday evening, witnesses and police said.

The IED blast occurred on a busy street in El-Qalow area located in the Wadajir district. It took place during a traffic jam that a high toll of deaths, according to an eyewitness speaking to KON.

The scene was later cordoned off by the police and the ambulances transported the wounded and the dead bodies to the hospitals in the city. There was an immediate claim of responsibility.

The bombing showed how Mogadishu security still remains volatile and is prone to attacks at any time by Al-Shabaab, which is facing defeats on the battlefields in Hiran and Middle Shabelle regions.

In August, at least 21 people were killed and more than 100 injured in a 30-hour siege at Hayat hotel at KM4 junction near a security checkpoint to the airport that is manned by NISA.