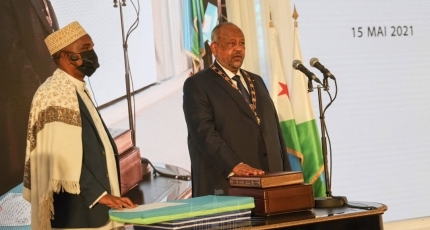 DJIBOUTI - Djibouti’s President Ismail Omar Guelleh was sworn in for a fifth term in office Saturday in a colorful ceremony attended by several regional heads of states and dignitaries.

Guelleh took the oath of office at his presidential residence in the capital, Djibouti City with the attendance of Somali PM Mohamed Hussein Roble, his Ethiopian counterpart, and Uhuru Kenyatta.

The president defeated one candidate in an election held last April that was boycotted by the opposition groups who had complained of curbs on freedom of assembly before the vote for the top seat.

The rights groups have denounced political repression and crackdowns on basic freedoms and called on Guelleh to protect the basic rights of the citizens and the press amid crackdown and censorship.

Guelleh was first elected to office in 1999 as Djibouti's second leader, taking over from his uncle, Hassan Gouled Abtidon, who ruled the small East African country since its independence from France in 1977.

Djibouti is located on the red sea, a strategic place that attracted several western countries, including the US which has hundreds of troops in the country as part of its effort to counter-terrorism in the region.