The group, which is responsible for killing thousands of civilians in East Africa and launching attacks against the AU's African Union Mission in Somalia (AMISOM), has threatened to disrupt elections. 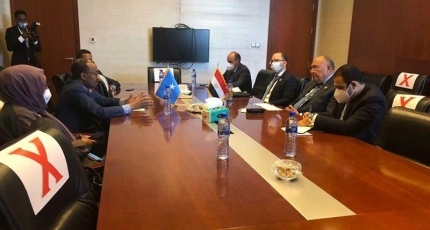 CAIRO - Foreign Minister Sameh Shoukry said Egypt hopes for a speedy agreement among the various Somali parties over electoral procedures, putting the country back on the path to reconstruction and stability.

Shoukry made the remarks as he met on Sunday with his Somali counterpart, Abdisaid Muse Ali, on the sidelines of the 35th Ordinary Session of the African Union (AU) Assembly in Addis Ababa.

Disputes between the country's President Mohamed Abdullahi Mohamed and Premier Mohamed Hussein Roble over how the elections would be held have delayed the polls for more than a year.

Observers have worried that the delay will endanger the stability of the troubled countries.

The UN has been calling the completion of Somali elections more important than ever at a time when the country is battling ISIS-linked Al-Shabaab terrorist group.

The group, which is responsible for killing thousands of civilians in East Africa and launching attacks against the AU's African Union Mission in Somalia (AMISOM), has threatened to disrupt elections.

During their Sunday meeting, Shoukry affirmed Egypt's support for its sisterly country’s stability.

The top Egyptian diplomat highlighted the need to ensure that post-2021 arrangements of the AMISOM are based on a comprehensive approach that includes building state institutions, reconstruction, and economic development, and is not limited to security and military dimensions only.

He also referred to how Egypt hosted a retreat in Cairo on the Post-2021 Arrangements in Somalia that were organized by the International Centre for Conflict Resolution, Peacekeeping, and Peacebuilding in cooperation with the AU, Federal government of Somalia, the UN, and several international partners.

The ministry added that the retreat contributed to the convergence of views between the various parties for the upcoming rounds of consultations.

In January, the Cairo International Center for Conflict Resolution, Peacekeeping, and Peacebuilding (CCCPA) organized a retreat on post-2021 arrangements in Somalia with the participation of Somalia, the African Union, the United Nations, and several international partners.

The retreat aimed to provide a space for informal consultations between Somali officials and African and international partners in order to discuss post-2021 arrangements in Somalia, given the end of the AMISOM mandate in March 2022, according to a CCCPA’s statement.

In a tweet, Ali hailed his discussions with Shoukry as "fruitful," saying they discussed issues of mutual interest including trade, education, maritime security, regional dynamics, and violent extremism.

At the end of the meeting, the two ministers agreed to update the memoranda of understanding (MoUs) signed between Egypt and Somalia in 2015.

What are the new Egypt’s pledges to Somalia?