Exclusive: Mogadishu airport attack was an ‘inside job’ and political

The sources add that the attackers were former Al-Shabaab defectors, including two who surrendered to the government in 2016, one year prior to Farmajo’s election, and the two others who gave up last year. 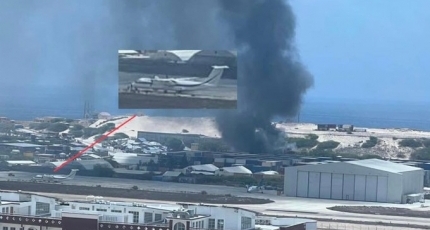 A US ISR Dash-8 (possibly N8200J) at Mogadishu’s International Airport during an attack by Al Shabab on March 23.

MOGADISHU, Somalia – The security agencies of the Somali Federal Government continue to mislead the public over the deteriorating security situation in the country amid rising Al-Shabaab terror attacks.

Intelligence sources revealed to the Keydmedia Somali Service that authorities in Mogadishu have not disclosed the facts about the March 23 attack on the Aden Abdulle International airport to the public.

The police in the capital said two gunmen from Al-Shabaab stormed the airport last Wednesday morning after gaining access from the marine gate and fought off the security forces inside for about two hours.

The attackers shot dead at least six people, including five foreigners, according to the police statement. Al-Shabaab said 17 people, among them westerners and African Union soldiers during the airport raid.

However, the fact is said to be different of that as the intelligence reports obtained by KON indicating the attack was carried out by four armed militants dressed in NISA uniform and there was an inside job.

The sources add that the attackers were former Al-Shabaab defectors, including two who surrendered to the government in 2016, one year prior to Farmajo’s election, and the two others who gave up last year.

The defectors were rehabilitated and trained at the Sarandi Camp, before joining NISA – the national intelligence and security agency and have been operating as plain-clothed agents at the airport.

The information shows that the two fighters had been working together for three years as “Double Agents”. They shot dead an AU soldier and a Somali at Marine gate to allow the two other militants to carry out the airport attack.

On the morning of the attack, the two men shot dead an AMISOM soldier and a Somali national to assist the two gunmen who killed six people, among them four foreigners, who were military trainers,' said the sources who asked not to be named as they were not authorized to speak on the matter.

The police said the two gunmen were killed inside but provided no further details on the facilitators cleared the way for the attackers to enter the airport facility with no resistance.

The Al-Qaeda-linked Al-Shabaab group could not able stage such an attack on a high-profile target in the capital without help from inside NISA, the notorious spy agency run by Fahad Yasin, a Qatari agent.

The sources added that Al-Shabaab was facilitated to attack Mogadishu airport in exchange to kill an anti-Farmajo female MP Amina Mohamed Abdi, who was assassinated in Beledweyne by a bomber.

The slain lawmaker was fighting for the justice of Ikran Tahlil, a 25-year-old NISA cyber security expert who was killed within the spy agency last year by her bosses for holding confidential information on the recruitment of thousands of youths who were sent to Eritrea for training 2019-2020.

During Fahad Yasin's tenure as director of intelligence, NISA recruited many of Al-Shabaab defectors, who are believed to have carried out assassinations and provided information that facilitated the terrorist group stage deadly attacks on the capital, Mogadishu.