Fahad Yasin is a former Al Jazeera Arabic journalist who has had a long root in the terrorist groups in Somalia and was accused of plotting many high-profile assassinations and attacks. 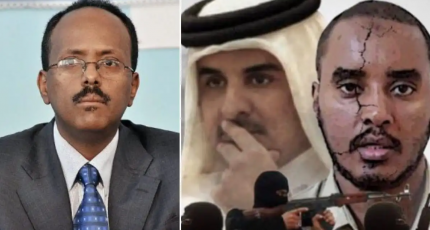 NAIROBI, Kenya - Qatar has penetrated the Somali political leadership and succeeded to gain control of Farmajo's government, thanks to Fahad Yasin, ex-Al-Jazeera correspondent in Mogadishu who managed to lead the National Intelligence and Security Agency [NISA] between 2018 and 2022.

The wealthy tiny Gulf country has been accused of providing financial support to Al-Shabab which is a branch of Al-Qaeda in East Africa. The group infiltrated NISA during Yasin's leadership.

Qatar hosts a number of terrorist leaders, including Al-Shabab's deputy leader, Mohamed Said Atom, who lives in Doha, a move that prompted Saudi and UAE to cut off ties with the country in 2017.

Qatar has penetrated Somalia's politics and it provides Al-Shabab with weapons, training, and protection because of its commitment to help Al-Qaeda and its branches," said Saudi journalist Adnan Muhammad said in a July 23, 2019 show on Saudi 24 TV (Saudi Arabia).

Fahad Yasin became a powerful and influential figure through money paid by Qatar in exchange for its interference in Somali politics. He held a national security advisor to Farmajo and NISA head.

We all know about the ties between the political leadership in Somalia and Doha, as well as the meetings between them. So all the support that the Al-Shabab movement receives, in terms of weapons, training, protection, as well as help with anything they need – it all comes from Doha," Muhammad added.

Qatar and the United Arab Emirates have both been sending money and weapons to Somalia since 2017 as part of their battle for influence in the strategic Horn of Africa country.

Also, Turkey, an ally of UAE rival Qatar set up its largest overseas $50-million military base in Mogadishu in 2017 to have an influence in Somalia by providing training to the country's army.