The relationship between the two leaders has strained over the dismissal of senior Intelligence agency officials close to the office of the president. 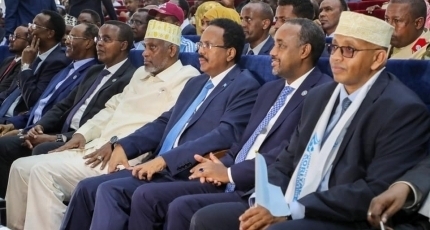 MOGADISHU, Somalia - The outgoing Somali president Mohamed Abdullahi Farmajo whose four-year chaotic term ended on February 8 of this year continues an altercation with the PM Mohaned Hussein Roble who is struggling to fix the mess he created.

Reliable sources close to Villa Somalia revealed to Keydmedia Online that Farmajo is working on a plot to thwart a planned trip by the PM to Saudi Arabia in the coming weeks or days.

The leaders of the five Federal States who are now in Mogadishu will accompany the PM on his visit to Saudi Arabia after receiving an invitation from the Kingdom which is trying to repair the strained diplomatic relations with Somalia.

The term-ended president wrote to Saudi's ambassador to Kenya twice within this week and spoke by telephone with Ethiopian Prime Minister Abi Ahmed to help block the PM's travel to KSA which comes as Somalia in the middle of an electioneering period.

Farmajo fears that Saudi Arabia will provide money to Roble and the regional heads which risks his re-election bid, according to sources. Last week, Villa Somalia sent a team to Abu Dhabi that met with Khalifa bin Zayed Al Nahyan, the President of the United Arab Emirates.

Somalia severed ties with Saudi Arabia and the UAE during the Gulf diplomatic crisis that began in June 2017 after Mogadishu sided with Qatar which maintains close relations with Farmajo and his right-hand man Fahad Yasin, who is the chief of the country's Intelligence.

This was part of Farmajo's failure in the foreign policy that prompted Saudi to suspend financial and humanitarian support to the war-torn recovering from three decades of bloody conflict. He was accused of putting his personal interest above the national interest.

He is also facing allegations that his office is using the public resources, including cash at the central bank for his re-election as he faces a stiff contest from heavyweight presidential candidates, including his predecessors Hassan Sheikh Mohamud and Sharif Sheikh Ahmed.