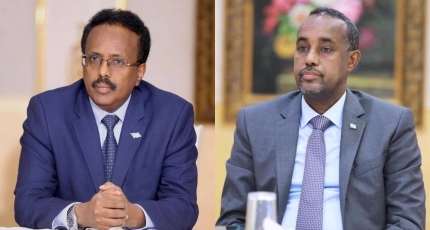 MOGADISHU, Somalia – The outgoing Somali president Mohamed Abdullahi Farmajo began to beat up the drum of a new civil war in the Horn of Africa nation after failing an indirect coup attempt last April.

The incumbent is current at loggerheads with PM Roble who is in charge of the elections and security in the country, taking over from him last May following his failure in a two-year illegal term extension.

The Prime minister’s travel schedule has been delayed for two hours after Farmajo forced airline companies whose owners are his close relatives to reject transporting the delegation to Kenya.

Sources disclosed to Keydmedia English that the PM made more efforts to get a plane and boarded later Salaam Air Express, which took Roble and his entourage to Mombassa, Kenya on Tuesday.

Since Roble’s Kenya visit surfaced, Farmajo put pressure on the PM. On Saturday, the outgoing president issued a presidential decree that wanted to ban the government from signing deals during the elections.

In response to the decree, Roble announced Monday that his government has the mandate given by the constitution to decide on the country’s future and continue the work until a new PM is sworn in.

Six months on since Farmajo’s term expired with the country failing to hold timely elections due to endless political crisis and bitter differences over the electoral process.

The tension is feared to get out of frying ban into a fire when the PM returns to the country after his day-long visit to Kenta, where he was holding bilateral talks with Uhuru on the restoration of the diplomatic relations.