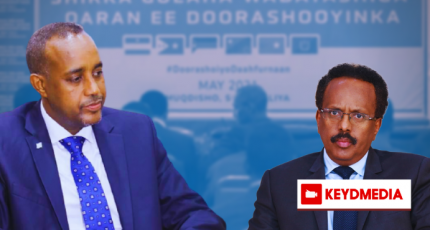 The fresh standoff came after PM Roble has suspended NISA head, Fahad Yasin, after failing to submit a complete report on the case of Tahlil's murder within 48 hours, starting from Sunday.

In response to the PM's ultimatum, Yasin who is in Turkey, where he got married last week sent a letter to Farmajo, Roble, and House speaker Mursal, asking to convene a crisis meeting.

Fahad, a former Al Jazeera Arabic journalist wanted to present a full report on Ikran's case at a meeting by the leaders of the National Security Council - Farmajo and the regional heads.

In a statement, PM Roble has appointed Gen Bashir Goobe to serve as the acting commander of the National Intelligence and Security Agency until an official boss is appointed.

The outgoing Somali president has backed Yasin, who is his right-hand man, and asked him to continue his duties after terming the PM's directive as illegal and unconstitutional.

This caused a new political tiff in the country which has already been beset by an electoral crisis that began after Farmajo's 4-year term ended in Feb. with no successor in place.

After failing a two-year illegal term extension that led to a battle in Mogadishu in April 2021, Farmajo handed over the security and election responsibility to the PM, a political novice.