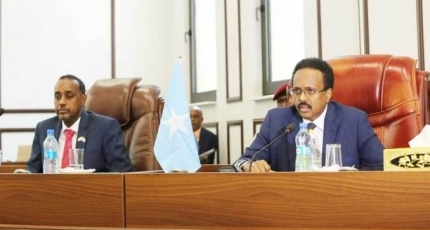 In a joint statement, the foreign diplomats based in Mogadishu called on Somali leaders - Farmajo and Roble to de-escalate the political confrontation surrounding the mysterious death of Ikran Tahlil and avoid any actions that could lead to violence in the country.

"We continue to engage a wide range of Somali leaders to urge for a rapid resolution of this dispute, including a credible investigation of Ikran’s disappearance and the completion of the electoral process without any further delay," reads the statement in part.

International partners said they are extremely concerned that the controversy surrounding the disappearance of Ikran Tahlil is creating political tensions that could impact the functioning of the Federal Government of Somalia and disrupt the electoral process.

The gridlock erupted after Roble sacked the powerful but controversial intelligence chief Fahad Yasin, a decision that was rejected by Farmajo who termed it as illegal and unconstitutional.

Yasin, who maintains close ties with Qatar as he once became Al Jazeera Arabic's Mogadishu bureau chief was replaced with General Bashir Goobe serving on an acting basis.

NISA's former boss was accused of being behind the abduction and subsequent murder of Ikran Tahlil, who worked as a cybersecurity expert of the spy agency. She went missing in June.