Five years over: Farmajo’s bad legacy for Somalia as President

Somalia has been hit by the deadliest single-day terrorist truck bomb attack in Mogadishu that left nearly one thousand people under his watch. 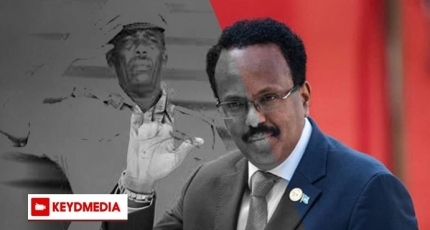 MOGADISHU, Somalia - February 8 marks the birth of the 9th president of Somalia five years ago, a man regarded as the worst elected leader of the Horn of Africa nation of all time.

Today, the people know Mohamed Abdullahi Farmajo for his legacy of injustice and power abuse. He was single for his entire presidency. He’s the only President who ruled beyond his term.

It's been five years since Farmajo, a dual US-Somali citizen has made a string of promises during his short 2017 campaign to be the president. He defeated Hassan Sheikh to win the seat.

In his inaugural address on 22nd February of 2017, he promised to defeat Al-Shabaab within the first two years in office, rebuild a strong army, end AMISOM's presence, hold one person, one vote election, and restore Somalia’s dignity by bringing peace and reconciliation to the country.

In addition to unfulfilled promises, Farmajo created a new crisis in the country, adding fuel to the fire after he refused to commit to a peaceful transition of power after finishing his 4-year term in February last year without a successor in place. The has left the country to uncertainty and renewed conflict. He staged two coup attempts in 2021 alone.

Security was one of Farmajo's key pillars in his agenda, but all things turned upside down when he took power and the country was hit by the deadliest terrorist attack that made headlines in the first 9 months of his presidency. A truck bomb killed at least 1,000 people and wounded hundreds at the K5 junction in Mogadishu on 14th October of 2017.

Al-Shabaab recaptured several towns that had been ousted before Farmajo was elected as president. This group made a comeback, a move that showed how he failed in the security sector that was largely infiltrated by terrorists who facilitated a series of attacks and assassinations of high-profile figures in Mogadishu.

As the consituion stipuilates. Somalia should hold an election every four years when the serving president ends his mandate. This didn't happen last year after Farmajo failed to prepare for making a power transfer to an elected successor. He invested his time and public funds in the demolition of the Federal States after a fallout with the regional leaders.

The cycle of political disputes engineered by Farmajo resulted in the delays of the election schedules in Somalia in 2021. The country is one year behind its vote for a new government.