Hassan Sheikh: You cannot hide from your responsibility

They even have not offered condolences over the deaths of the innocent citizens killed in the terrorist attack at the popular hotel in Mogadishu that marked the most complex and lethal raid since the start of 2022. 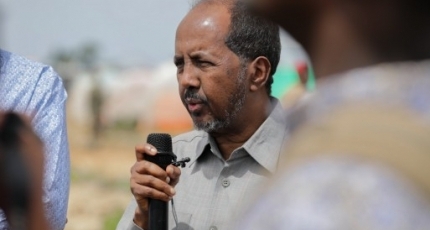 MOGADISHU, Somalia – For the past five years, the people of Somalia have hugely criticized Mohamed Abdullahu Farmajo during his tenure as president for hiding from the public in difficult times.

Farmajo had rarely addressed his people on attacks or political tension in Somalia and his condolences to families who lost their loved ones in the terrorist menace kept silent about the plight of the citizens.

The current leadership in his first 100 days in office seems to be following in the footsteps of Farmajo as President Hassan Sheikh and his PM Hamza Abdi Barre are silent on the Hayat hotel carnage by Al-Shabaab.

They even have not offered condolences over the deaths of the innocent citizens killed in the terrorist attack at the popular hotel in Mogadishu that marked the most complex and lethal raid since the start of 2022.

In such tough times, people want leadership that heals and does not hide or shut their mouths.

Hassan and Hamza should discharge their responsibility and learn from the past faults of their predecessors who were known for their negligence of security and failed to put the interest of the nation first.

They were entrusted and sworn in to protect the country and its people from external and internal enemies at every cost. Everyone in the security sector must be held accountable for negligence and fired.

Somalia has been bleeding for 30 years. Enough is enough. This time, the country wants a leader of the action not words of mouth. Al-Shabaab’s threat and financial sources are expanding by the day.

At least 21 people, including women and elders, were killed and 117 wounded in a terrorist siege at Hayat hotel in the busy Km4 junction in Mogadishu. The attack took more than 30 hours to be ended.

It became the deadliest by Al-Shabaab since the election of Hassan Sheikh as the 10th president of the Federal Republic of Somalia on May 15 of this year by the lawmakers of the parliament in Mogadishu.

The president’s inner circle, including the director of the Intelligence Mahad Salad, interior minister Ahmed Moalim Fiqi and the state minister for presidency Abshir Bukhar used to condemn Farmajo for his lack of condolences when a tragedy happens in Somalia.  But now they are in the same position.

An official who was one of the figures who led “Badbado Qaran”, a national salvation force established to prevent Farmajo from extending his term by two years in 2020, told Keydmedia Online that they won't accept what they fought against.

He urged the current leaders in Villa Somalia to refrain from rubbing salt into the wounds of the suffering people, especially those residing in Mogadishu, who endured decades of bloody conflict.