Hundreds of Somali soldiers killed while fighting against TPLF 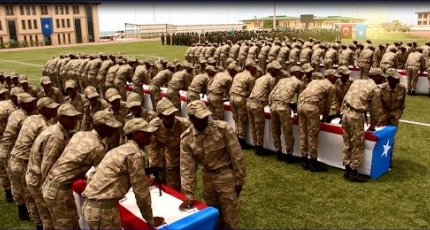 MOGADISHU, Somalia – A confidential report leaked by a former Somali Intelligence official revealed that 370-700 Somali soldiers died in the Tigray conflict last year while fighting along with Ethiopian forces.

Former deputy chief of Somali National Intelligence and Security [NISA] Abdisalan Guled told local media that the soldiers were taken from training camps in Eritrea to join ENDF in the fight against TPLF rebels.

The news has emerged as families of the soldiers have been staging rallies in Mogadishu to demand the government to bring back their boys recruited by NISA and sent them to Eritrea secretly for training.

Guled argues that he obtained the information from reliable colleagues within the Ethiopian secret service who told him that nearly a thousand Somali soldiers from neighboring Eritrea participated in the Tigray war.

Keydmedia Online had published the report two weeks before it surfaced.

The death toll is likely to rise as hundreds of more soldiers sustained wounds, some in critical condition have been admitted to military hospitals in Eritrea after the battle against TPLF subsided, per sources.

NISA Fahad Yasin, who maintains close ties with Qatar is the brain behind the decision to send the youths to Eritrea for training to become plain-clothed spy agents. Some of them returned home and others never.

A high ranking general within Galmudug forces told Keydmedia Online that most of the boys killed in Ethiopia were enrolled at NISA offices in the regional state without the authorization of their parents.

The Somali government has not yet commented on the allegations. But, this comes as the Ethiopian army chief paid an unannounced trip to Mogadishu and held a meeting with President Farmajo in Mogadishu this week.