The members of the Security Council expressed their deepest sympathy and condolences to the families of the victims and to the Government of Somalia and wished a speedy and full recovery of those injured. 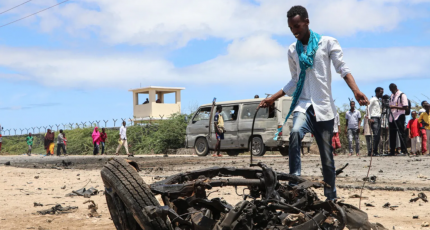 NEW DELHI - India on Saturday strongly condemned the terror attacks at the Mogadishu International Airport area in Somalia and conveyed sincere condolences to the families of the victims.

The attack took place on March 23 resulting in the death of dozens of people and injuring many.

Al Qaeda-linked Al Shabaab said it was behind the attack. The increasing frequency of terrorist incidents conducted by Al Shabaab is a matter of serious concern, the Ministry of External Affairs said.

Terrorism is not just a threat to Somalia, but to the whole world.

We reiterate our full support to the operations conducted by the Somali forces and the African Union Mission in Somalia (AMISOM) against Al Shabaab and that the international community must continue to stand behind Somalia in its fight against terrorism,' the ministry stated.

India will continue to support Somalia and its people in their collective desire for a stable, secure, and peaceful future.

On Friday, the members of the Security Council condemned in the strongest terms the terrorist attacks that took place in the Aden Adde International Airport area in Mogadishu, and Beledweyne, Hirshabelle on March 23.

The members of the Security Council expressed their deepest sympathy and condolences to the families of the victims and to the Government of Somalia and wished a speedy and full recovery of those injured.

The members of the Security Council recognized and honored the sacrifices made by the Somali security forces and African Union Mission in Somalia (AMISOM) personnel during the attack, and throughout AMISOM’s 15-year deployment in Somalia.

It's the second attack on an election site since Wednesday when Al-Shabaab fired at least six mortars into Barawe, a coastal city in the Lower Shabelle region, killing four civilians.

Bomb blast at a teashop in Somalia’s Puntland kills 3