Al-Shabaab has claimed responsibility for the killing of the NISA officer in a statement posted on it's affiliated media outlets. 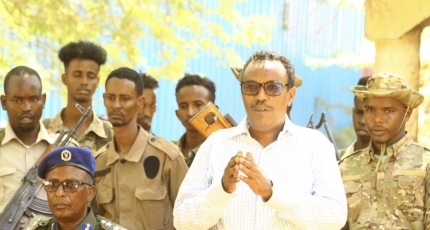 LUUQ, Somalia - A bomb explosion in Southern Somalia killed a top intelligence official who was forefront at the war on Al-Shabaab militants.

Bakaal Kuuke died in a roadside blast targeted his car on Thursday night on the outskirts of Luuq town in Gedo province which is located on Somalia-Kenya.

The passing on of NISA Colonel Abdurahman Abdullahi Bakaal Kooke is very painful. May Allah grant him Jannah. Rest assured, he will be avenged," said Adam Aw Hirsi, the state minister for environment who is a close relative of the slain official.

The NISA official was returning from Luuq and en route to Dolow within the region at the time of the attack.

His driver and other NISA agents were also wounded in the overnight landmine explosion.

Al-Shabaab has claimed responsibility for the killing of the NISA officer in a statement posted on it's affiliated media outlets.

Bakaal Kuuke was at the forefront of the ongoing offensive against Al-Shabaab in southern Somalia.

Gedo region has been the flashpoint of the political crisis in the country during Farmajo's leadership.