Is Al-Shabaab a UN puppet, latest developments strongly suggest so

Last month, the UN Security Council voted to prolong the embargo. According to Mogadishu, the extension strengthens the insurgent organization Al- Shabab’s position and sustains the nation’s precariousness. 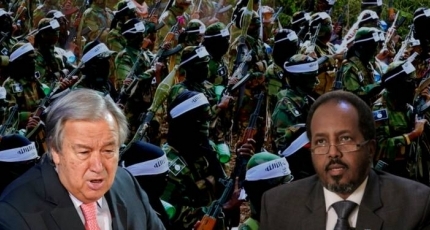 Somalia is protesting against the extended arms embargo amidst a war on Al-Shabaab. The country has been in place for three decades, despite protestations from the Somali government.

Last month, the UN Security Council voted to prolong the embargo. According to Mogadishu, the extension strengthens the insurgent organization Al- Shabab’s position and sustains the nation’s precariousness.

Resolution 2662 (2022) gave a further lifeline to resolution 751 adopted by the UNSC in 1992 to limit the flow of weapons into Somalia, in addition to other restrictions such as a ban on charcoal, and the listing of certain individuals believed to be aiding terrorism and destabilizing the government.

Somalia has long been an underserved theatre in the United States counter-terrorism campaign. Drone strikes in Somalia, military advisors assisting Somali partner forces, or an al-Shabab attack in the region make headlines from time to time and then fade away. Furthermore, Al-Shabab extremists in Somalia have recently become “bolder” in their attacks, increasing the use of suicide bombers wearing homemade explosives in what security experts refer to as a “change in tactics.”

Nonetheless, the Biden regime’s support for the Somali government has been inadequate. And there’s a simple explanation for this: growing evidence of links between Iran and Al-Qaeda’s African branch, Al Shabab. To be clear, Joe Biden’s reverence for the Iran Nuclear Deal is nauseous. The world has seen how far the US president is willing to go for appeasing Iran. Biden’s foreign policy has been a disaster for the United States. Even the traditional US allies in the Middle East were overlooked in the rush to court Iran; Somalia is still a relatively smaller ally.

Furthermore, contemporary “progressive” democrats have repeatedly demonstrated, albeit covertly, their allegiance to the Islamic Republic of Iran and Iran-backed terrorists. Remember when US Representative Ilhan Omar went after President Joe Biden for conducting airstrikes against Al-Shabab? Unfortunately, today’s Democratic Party has been hijacked by many Ilhan Omars, something which is reflected in Democratic foreign policy.

To be completely honest, a politically unstable Somalia serves only Biden’s political ends. Because a terror-free Somalia would quickly gain membership in important African regional organizations like EAC. And the more potent the EAC, the more influential the African economy would be. This could be a major reason for annoyance for the West.

Without a doubt, the US influenced the latest UN vote to prolong the arms embargo. This would maintain Somalia’s reliance on the West to combat terror insurgencies and enable America to exercise its control over Somalia’s internal affairs. And we have all seen how, since its establishment, the UN has defended the interests of its American backers by promoting policies in Africa that are in line with the goals of US foreign policy.

Over the past few decades, the organization has asserted that its mission is to advance peace in developing countries. Numerous studies, however, show that the United States has not been successful in lowering ethnic violence in many African nations. Moreover, the UN assistance comes with strings attached called “conditionality”. Controlled by Washington, the organization frequently compels governments in Africa, Asia, and Latin America to undertake structural transitions which often overlap with the culture of the West.

The United States has always sought to thwart the emergence of Africa. A resolute Africa would never be advantageous to the West. The prosperity of western countries is a result of the exploitation that prevailed in Africa. Somalis are correct to state the fact that the United States is largely to blame for their nation’s inability to reach its full potential.