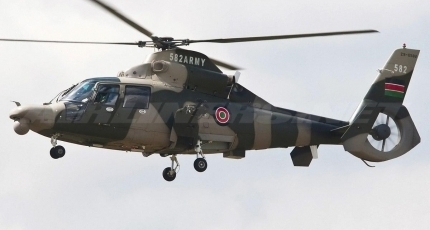 A mom and her toddler are among several people who died in the airstrikes on rural areas in the Gedo region, including El-Adde, where hundreds of KDF soldiers were killed in the Al-Shabaab raid on Jan 15, 2016.

The mother was identified as Sahra Aden Warsame.

Six others, mostly children were confirmed wounded, some in critical condition in the missiles fired on pastoralists by the Kenyan defense forces [KDF] during the air operation, according to local officials.

Kenya suffered its largest ever military defeat at the battle of Al-Shabaab in Somalia when compared to their colleagues in the African Union [AU] mission from Uganda, Burundi, Ethiopia, and Djibouti.

Somali authorities in the region remained silent on the civilian massacre by the KDF serving under AMISOM, who are accused of committing atrocities in the Lower Juba and Gedo regions.

Kenyan military's airstrike comes amid strained relations between the two neighboring countries which are embroiled in a stiff dispute over their Indian Ocean maritime boundary.