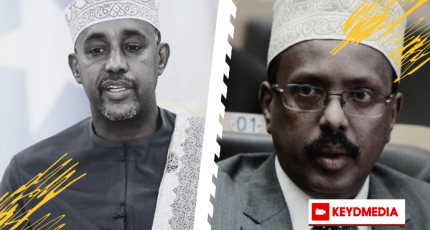 Multiple sources privy to the meeting revealed to Keydmedia English that the two leaders met at the Farmajo's office in Villa Somalia through the mediation of Southwest State leader.

The regional leader Abdiaziz Lafta-Garen is trying to mediate the standoff between the two leaders that broke over the murder of Ikran Tahlil and the sacking of Fahad Yasin from NISA.

The main agenda of the talks remains unclear, but the sources say the case of the slain NISA female agent dominated the talks as the PM wants to prosecute the perpetrators.

The meeting which was held last night has followed other talks today after Farmajo received at his office the minister of security Abdullahi Mohamed Nor and NISA head Bashir Goobe.

The previous mediated talks ended in failure as Farmajo always puts tough conditions on the negotiating table so that no deal can be reached on justice for the assassinated Ikran Tahlil.

Ikran, 25, who served as the spy agency's cybersecurity expert was abducted from her house on June 26 on a NISA vehicle and taken to Godka Jilacow jail before her secret execution.

The girl who was trained in the UK and worked as an assistant to the late Mogadishu mayor who was killed in a bomb blast at his office in 2019 was reportedly killed by NISA bosses.

She has had confidential information about the names and pictures of thousands of Somali youths recruited and sent to Eritrea for training in 2019-2020 by ex-NISA director Fahad Yasin.

After their training, the soldiers were deployed to Tigray by the end of last year soon after the war began. The UN said they have been spotted fighting along with Ethiopians and Eritreans.

None of them returned home. This sparked families to stage streets protests in Mogadishu, asking the government to bring back their sons taken without their consent by Fahad Yasin.