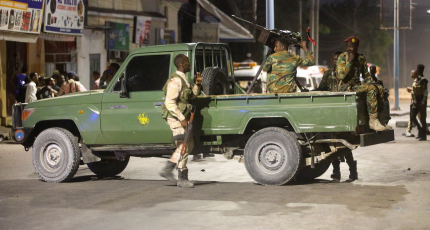 MOGADISHU, Somalia - At least three police officers were reported to have been wounded during a gunfight with units of the military in the capital, Mogadishu on Thursday morning.

Speaking to the reporters in the scene, police spokesman Abdifatah Aden has confirmed that the battle erupted over a disputed land located between Benadir and Zoobe junctions.

Abdihamid Fanah, the chief of the Turkish-trained elite police [Haram'ad] was among the officers who sustained wounds in the confrontation between the police and the military.

Other casualties were reported from the fighting, which also resulted in property damage and the destruction of vehicles at a parking lot in the scene.

The sources added that the fighting forces, especially the military, are under the command of an officer named Liban Madaxweyne, who is a close ally to the outgoing President Farmajo.

The infighting comes amid growing political tension between Farmajo and PM Roble who are at loggerheads over the disappearance and subsequent murder of Ikran Tahlil, a NISA officer.