The exact casualty figures remained unclear as police launched an investigation into the attack. 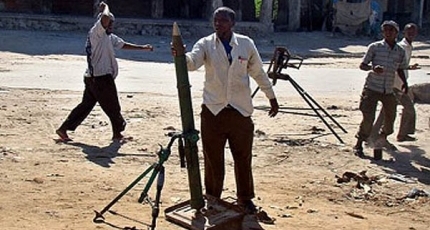 MOGADISHU, Somalia - Several mortar rounds landed around the heavily guarded presidential palace in Mogadishu on Wednesday noon, the latest attack in a string of incidents that raise the eyebrow of western allies waging counter-terrorism operations in the country.

KON's correspondent in the city reported that the mortar shells have been targeted the presidential palace and a nearby NISA prison as well as residential areas in the Wardhigley district, causing panic among locals.

Somali security forces cordoned off the streets close to the sprawling hilltop palace with ambulances rushed to the scene to evacuate the wounded to the hospitals for medical care. The casualties still remained sketchy.

It's yet unclear who is behind the attack, but police blame the Al--Qaeda-linked Al-Shabaab group for firing the shells from within the city, taking advantage of the current political crisis resulted from Farmajo's two-year term extension.

The mortar bombing comes a day after a district official was killed in an IED blast in Daynile district, north of Mogadishu, showing how security is getting out of the government's hands.