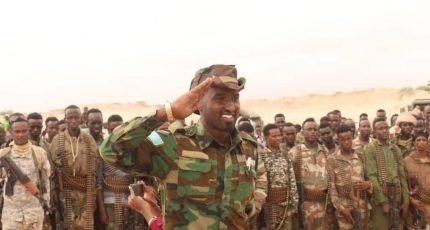 MOGADISHU, Somalia - After the break-up of a new political war between outgoing Somali president Mohamed Abdullahi Farmajo and PM Roble in Mogadishu, the National Salvation forces have been activated to act quickly in saving the country from sliding back into a fresh conflict.

Keydmedia English learned from multiple military sources that the NSF is currently being mobilized in El-ma'an, some 35 kilometers away from Mogadishu and Deynile within the capital.

The troops led by senior military commanders have been put on standby on several bases and will move into Mogadishu to respond to calls to prevent Farmajo from shielding Fahad Yasin.

NSF is credited for foiling a coup attempt in April by Farmajo, who extended his term by two more illegal years. The troops' action saved Somalia from returning to another dictator's hands.

This came after Farmajo rejected PM Roble's decision to sack Fahad Yasin, the controversial NISA head as illegal and unconstitutional, prompting a power struggle between the top leaders.

Yasin is facing allegations that he was behind the murder of a 25-years-old female spy agent working as a cybersecurity expert with NISA since 2017. She disappeared on 26th June 2021.

NISA issued a statement last Thursday, announcing Tahlil was abducted and killed by Al-Shabaab, a claim that the terror group has vehemently denied as baseless and astonishing.

In what seems to be direct defiance to Roble's call to submit a full report on Ikran Tahlil's case within 48 hours, the NISA director asked Farmajo to convene a national security council meeting to discuss the mysterious death of Ithe intelligence officer.

Yasin's insubordination forced PM Roble to sack him as NISA boss and he was replaced with General Bashir Goobe to serve on acting capacity. The dismissal was Swifty boycotted by Farmajo.

The fresh standoff is feared to impact the election deadline in Somalia as the PM who was in charge of the electoral process is now shifting his focus to the fight against the incumbent.