The AU official has been on a three-day visit to Somalia where he held high-level engagements with government officials, civil society members, and Somalia's international partners. 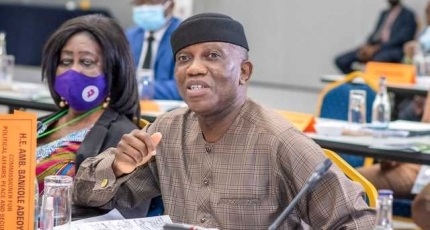 MOGADISHU, Somalia -- The new African Union peacekeeping mission in Somalia will focus on stabilization and state-building processes with a clear end goal in sight, a senior AU official said Tuesday.

Bankole Adeoye, the African Union Commissioner for Political Affairs, Peace and Security, said the new mission to be called the African Union Transition Mission in Somalia (ATMIS) will be multi-dimensional with clear timelines.

'ATMIS is 100 percent aligned with the Somalia Transition Plan. This implies that the strategy of the Government of Somalia and the objective of ATMIS will be aligned. This is the number one factor that will make a difference,' Adeoye said in a statement issued in Mogadishu, the capital of Somalia.

The AU official has been on a three-day visit to Somalia where he held high-level engagements with government officials, civil society members, and Somalia's international partners.

Somalia and the AU have adopted a roadmap to replace the African Union Mission in Somalia (AMISOM) with a new mission to be called ATMIS subject to authorization by both the AU Peace and Security Council as well as the UN Security Council.

'This time around, Somalia's plan is actually front and center of ATMIS, with the full support of the European Union and the whole gamut of the United Nations,' Adeoye said.

He said the ATMIS will have a mobile and agile force that can rapidly degrade, eliminate and decimate terrorists or armed groups that are making life difficult for the good people of Somalia.

'ATMIS will have a character of a mission with an end goal, and that end goal is to transfer the full responsibilities of security to the Federal Government of Somalia,' the AU official said.

The AU official said that the adoption of the Concept of Operations (CONOPs) and the joint proposal in early February for the establishment of a new mission in Somalia by the AU and the Somali government and other key stakeholders was a consultative and exhaustive process guided by a set of principles that included the respect for the sovereignty and territorial integrity of Somalia, national ownership and leadership by the government and adherence to the spirit of political dialogue, inclusivity and reconciliation.

'What I am taking away from here is that the African Union and the Government of Somalia remain within the vision and mission of the African Union to build an integrated, prosperous, and peaceful continent,' Adeoye said at the end of his visit.