Al-Shabaab poses a potent threat to Somali security as it carries out attacks in government-controlled areas in the south and central Somalia. 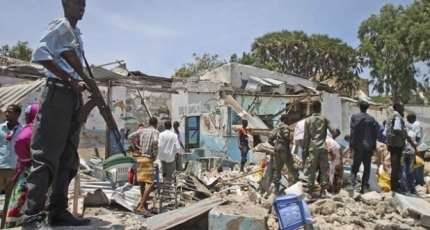 AFGOYE, Somalia - An IED attack near Somalia’s capital, Mogadishu, has left one police officer dead and several wounded in the latest terror attack to rock the war-torn east Africa country.

The landmine blast at a checkpoint at the entrance of the Afgoye district ripped through lines of vehicles, including the police officer's car on a busy Wednesday morning.

Images shared on social media have shown black smoke billowing from the site and debris and a pool of blood scattered on the ground at Bar-Ismail checkpoint manned by Somali police.

The poice - Abdi Madobe has died on the spot and his body has been taken to a hospital along with the wounded persons, according to a witness who spoke to the Keydmedia's Mogadishu reporter by phone.

No group claimed responsibility for the bombing. Previous attacks have been blamed on the Al-Qaeda-linked group Al-Shabaab which is fighting to topple the UN-backed Somali government.

Afgoye lies approximately 30 kilomeywt4s northwest of the capital. It has seen increasing Al-Shabaab attacks for the past months due to lax security after AU troops left the defensive base last year.