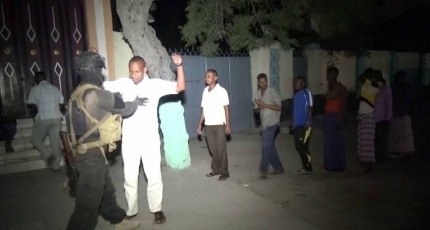 MOGADISHU, Somalia -  The Indian Ocean front Somali capital sees a surge in armed robbery and the situation is now becoming out of hand, with inhabitants recounting previous war days and anarchy.

The robbery at gunpoint has added fuel to the already fragile situation in the city, with a population of at least four million people and housing the weak UN-backed government, AU, and western missions.

Armed men in military uniforms rob the people on the streets, in the businesses, and in homes as well in a broad daylight and mostly during the night, with security forces failing to address the ongoing problem.

A KON reporter in Mogadishu was among the victims, saying the robbers are drunken policemen with no signs of kindness as they point their guns with fingers at the triggers on your head. What a danger, he added.

Every day or night, there is a cry at a home, children lose fathers, a mother loses her son, and a wife is widowed in the city due to the insecurity, and authorities are watching this unfold and pay no attention.

There are also organized youths, mostly teenage boys with knives locally known as “Ciyaal-Weer” who are mobilized in every village in Mogadishu, attacking each other and now starting to rob mobile phones.

Mogadishu residents have been in crisis for more than 30 years and have hoped to make a recovery, but the current situation is damaging the new image and could stop the booming businesses and buildings.