Soldiers killed in militant attack on Somali army base

Wisil is located near Hobyo, a port city in the Mudug region, approximately 857 kilometers from Mogadishu. 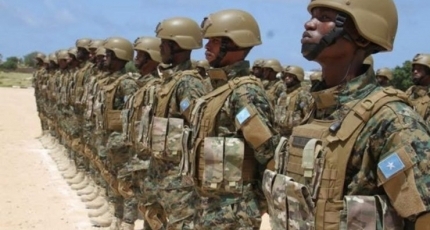 MOGADISHU, Somalia - Al-Shabaab militants overran an army base in central Somalia on Sunday morning, killing at least 34 soldiers before pulling back in the face of a counter-attack, the terrorist group said.

The attackers breached the gate of the base in Wisil town in the southern Mudug state with a suiciding bombing before engaging in a heavy gunfight with the soldiers from the army's 21st battalion under the central command.

During the battle, both sides have used machine guns and artillery the inflicted casualties on the warring forces, according to a military source. The Somali soldiers fought back hard and managed to fend off the fighters.

In May of this year, Al-Shabaab retook control of a nearby strategic town of Ba'adwayne from Somali troops following a deadly attack that left dozens of soldiers dead and wounded many more others.

Today's attack was recorded to be the deadliest single-day incident in Somalia as the country is trying to recover from three decades of bloody conflict with the political leaders gathering in Mogadishu for election talks.

The Al-Qaeda-linked group stages attacks on soldiers and civilians in the region and beyond, including Mogadishu with the aim to oust the weak UN-backed Somali Federal Government.