Somali army regains control of a key town from Al-Shabaab

The town has been changing hands between SNA and Al-Shabaab for months as the fighting intensifies in central Somalia. 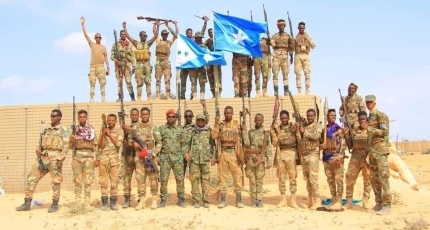 GALKAYO, Somalia - Somali government forces along with Galmudug Darwish soldiers have regained control of Ba'adweyne village in the southern Mudug region on Saturday morning, which was controlled by Al-Shabaab for weeks.

In recent days, the allied forces have been conducting operations on the outskirts of the Ba'adweyne and Wisil near Hobyo port city, forcing Al-Shabaab to withdraw from its bases.

Heavily armed soldiers from the 21st Division of the Somali National Army (SNA) said they retook control of the area peacefully and ensured security in and the surrounding areas.

Reports from the central region say that the government and Galmudug forces are conducting mine-clearing operations in Ba'adweyne and its outskirts in the town following the capture.

The army foiled a suicide bomb attack near Ba'adweyne on Friday which Al-Shabaab aimed to detonate at a military base after the bomber was shot dead before reaching his target.

Located in central Somalia, Mudug region has been the scene of several skirmishes between government forces and Al-Shabaab in recent months as local forces backed by SNA try to retake all areas still remained under the militants' control.