Al-Shabaab's decade-long insurgency has not only focused on attacks inside the country, but the extremists also have staged attacks in Kenya and Uganda. 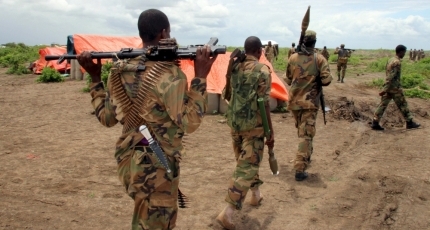 DIINSOOR, Somalia - The Somali national army [SNA] says it has repelled a new assault by Al-Shabaab militants on the strategic southern city of Diinsoor in the Bay region on Saturday afternoon.

Senior SNA officials in the town have confirmed that the repulsing of the attack by troops led to a heavy gunfight with the terrorists who lost 15 combatants while many others escaped with gunshot wounds.

Somali military, however, did not disclose the number of soldiers killed but said the terrorists were overwhelmed by the gallant troops who are well-coordinated and put on higher alert as they are stationed in a frontline area.

"The SNA soldiers have fended off the attack after getting prior credible information of planned ambush on their base by the terror group," said the military, adding that the situation has returned to normal on Sunday morning.

Keydmedia Online recently reported that Al-Shabaab is waging kidnappings and constant attacks on the district and evicting local residents and livestock herders from their grazing lands on the outskirts of the town.

The Al-Qaeda-linked group has laid a blockade on key towns in Bay and Bakol regions that are under Somali government control, causing high inflation and food shortages with Southwest state and Somali government failing to re-open the barricaded roads.

Al-Shabaab attacks appear to be on the rise to counter an offensive by the government forces along with AU troops in the Middle Shabelle region, where hundreds of militants were killed in the past four weeks.