Somali forces battle to end siege at hotel in Mogadishu

Al-Shabaab has been largely weakened in an ongoing military operation in central regions, where the group lost dozens of villages to Somali troops and pro-government clan militias. 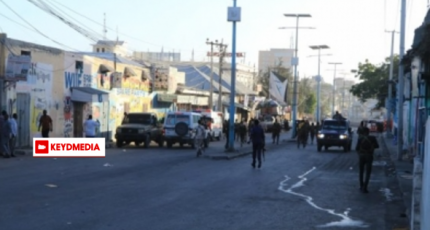 MOGADISHU, Somalia - Somalia attackers are still firing from Villa Rose hotel near the presidential palace where they holed up since last night when the attack began at around 8:10 P.M. local time.

The attack began with a suicide blast that struck at the gate of the hotel then heavily armed gunmen entered the building, and began shooting at the guests, including government officials.

Somali security minister Doodishe is among several people who sustained wounds and escaped from the attack with the police reporting that they rescued dozens of officials and civilians.

The security experts raised questions over how the Al-Shabaab attackers managed to attack this hotel located in a green zone, where ordinary people and vehicles were blocked by NISA.

Impossible to conduct major attacks in Mogadishu's most secure district almost every month consistently without fail unless you got insider support," said Rashid Abdi, Horn of Africa security Analyst.

The roads leading to Villa Somalia, the Statehouse have been closed from public use and the cars by government officials pass through the security checkpoints with IDs.