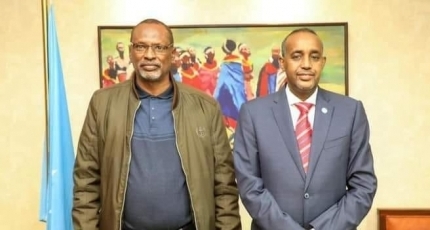 MOGADISHU, Somalia - The Somali cabinet is expected to convene an extraordinary meeting to delist the ONLF as a terror organization and apologize for Qalbi-Dhagah's 2017 extradition.

According to sources, the cabinet will reverse the decision by the previous government led by Hassan Ali Khaire to label Ogaden National Liberation Front as a "terrorist organization."

During the meeting, the Ministers will also extend a full apology to Qalbi Dhagax, who was illegally deported and handed over to the Ethiopian government by the Farmajo administration.

ONLF describes itself as “a national liberation organization fighting for the rights of the Somali people in Ogaden, Ethiopia and has no involvement in Al-Shabaab terror activities in Somalia.

The ONLF commander Abdikarim Muse Qalbi Dhagah was freed by Ethiopia in June 2018 a year after being held in jail. His arrest and subsequent rendition have sparked a public outcry.

PM Roble earlier this month formally apologized to the UAE for a seizure of $ 9.6 million by NISA at Mogadishu airport in April 2018, which he promised would be returned to Abu Dhabi.

The latest decisions come at a time when the prime minister is embroiled in a power struggle with Farmajo who ordered the governor of the central bank not to release the UAE money.