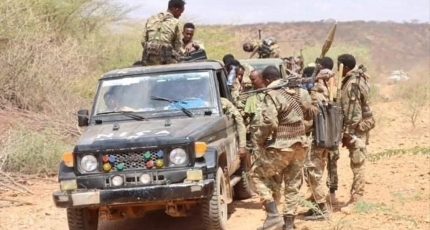 MOGADISHU, Somalia - The Somali military’s land forces commander, Gen. Mohamed Tahlil, said Friday that the army killed 67 terrorists in the Middle Shabelle region, bringing the number of al-Shabaab fatalities to 217 in less than a week.

Tahlil said the army attacked the village of El-Ba’ad late Thursday after it received intelligence that the terror group was gathering in the vicinity to attack the national army.

He said the army, backed by local clan militias, will continue to fight the al-Qaeda-affiliated terror group.

A military official in the region who spoke to Anadolu Agency on condition of anonymity said security personnel was injured in the operation.

Defense Ministry spokesman Abdullahi Ali Anod said Thursday that the army killed at least 150 al-Shabaab terrorists during an operation on the outskirts of Runirgod, including the group’s five foreign fighters.

Runirgod is a strategic town that was liberated by the army Thursday which was the last al-Shabaab stronghold in the region. It is 240 kilometers (149 miles) north of the national capital of Mogadishu.

It was the second strategic town that the army liberated in less than a month.

Government forces, backed by local clan militias, have recently liberated large swathes of territories, mainly in the state of Hirshabele.

Somalia has been plagued by insecurity for years, with al-Shabaab being one of the main threats.

Since at least 2007, al-Shabaab has waged a deadly campaign against the Somali government and international forces, claiming thousands of lives.

The UN has also warned of growing instability, with periodic reports on Somalia this year detailing attacks by al-Shabaab and pro-Daesh/ISIS terror groups.