The ongoing political impasse in Somalia, according to Blinken has broader implications, including undermining Somalia’s economic reforms and putting in jeopardy timely international debt relief. 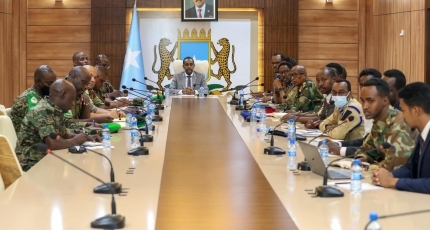 MOGADISHU, Somalia – Somali PM Mohamed Hussein Roble has held ab emergency meeting on Tuesday with SNA and AMISOM chiefs at his office in Mogadishu amid a surge in the Al-Shabaab threat.

According to a statement released by the PM’s office, Roble told the military commanders from the Somali national army and the African Union mission [AMISOM] to scale up their operations against Al-Shabaab.

The meeting also focused on Mogadishu security after the Al-Qaeda-linked terror group Al-Shabaab has carried out a series of attacks on police and military stations last month, raising the public panic and fear.

Somali PM said the country is currently at a critical juncture of security and political transition with AU forces having 30 days left for their withdrawal from the Horn of Africa country after 15 years of the mission.

The country which relies on foreign assistance has long been beset by internal wrangles among its political leaders that resulted in frequent delays in the parliamentary and presidential since last year.

PM Roble is in charge of the election and the security. He is facing obstacles from the outgoing president Mohamed Abdullahi Farmajo. Both top government leaders are fighting for the control of the country.

On Tuesday’s meeting at the PM, office was meant to review the security situation and set up a strategy to face Al-Shabaab after the group changed its tactics to the use of suicide bombers targeting key areas.

The failure in a timely election is one of the main factors of the insecurity in Somalia since Al-Shabaab takes advantage of the transitional period, where government leaders shifted their focus on re-election.

Last week, the US announced visa restrictions on current and former Somali officials who are believed to be responsible for, or complicit in, undermining the democratic process.

‘We are now imposing visa restrictions under this policy against a number of Somali officials and other individuals to promote accountability for their obstructionist actions,’ said US Secretary of State Anthony Blinken in the Feb 25 statement.

The ongoing political impasse in Somalia, according to Blinken has broader implications, including undermining Somalia’s economic reforms and putting in jeopardy timely international debt relief.