Since finishing the training, the soldiers were held in the camps against their will as Eritrea’s dictator Isaias Afwerki reportedly demanded $50M from the Somali government. 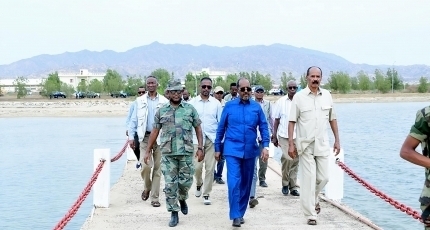 MOGADISHU, Somalia – The president of Somalia Hassan Sheikh Mohamud will return to Africa’s isolated Eritrea in the coming days for the second trip since July 2022.

Multiple sources confirmed to Keydmedia Online the trip of the president which is based on 5000 Somali soldiers stuck in Eritrea camps after completing their training.

The soldiers recruited by former NISA director Fahad Yasin from different regions in Somalia were sent to Asmara in 2019 and 2020 after being lured to jobs in Qatar.

Since finishing the training, the soldiers were held in the camps against their will as Eritrea’s dictator Isaias Afwerki reportedly demanded $50M from the Somali government.

Qatar pledged the payment of the training expenses but it changed its promise after Farmajo lost the May 15 election that ended Doha’s long influence in Somalia.

The president making efforts to remove the barriers and bring the soldiers back to Mogadishu as his government is currently at war with Al-Shabaab, Al-Qaeda’s ally.

The parents of the boys have staged street protests in the capital during Farmajo’s presidency in 2021, calling for the return of the soldiers, but their voices fell to deaf ears.

Abdikarin Ali Kaar, Villa Somalia spokesman said in July this year that some soldiers lost their lives during the harsh training and others have died for natural causes.

Kaar denied reports by local media and the UN that the troops took part in the Tigray conflict, helping the Ethiopians and Eritreans in the fight against the TPLF rebel group.